Among the 5 mono civs decks, mono water is probably the most playable one. Can check it out if you haven't look at my previous post on mono water midrange deck.

Mono nature is the second worst mono civ deck in my opinion (if mono fire is not considered equally bad). The usual mono nature deck utilizes the beast folk race which has a lot of the great evo creatures like Barkwhip and Storm Wrangler, together with draw cards like Brutal Charge +/- Cavern Raider to replenish the hand.

The deck that I'm going to present to you will try something different. As mentioned in previous posts, the purpose is not to play competitively, but to add fun to the boring competitive environment with metagames.

The discussion is not going to be long, because of the limiting civilization and hence limited alternative cards.

Here you are with the deck. The text box in the image shows the number of cards corresponding to each mana cost. 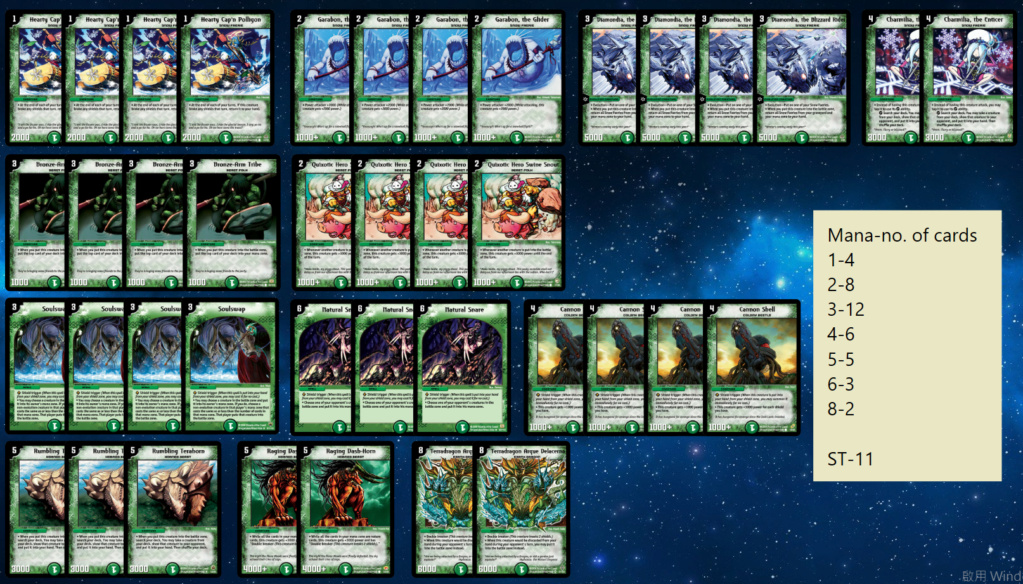 The game plan is to go aggro as early as possible, with Diamondia as the support card to increase board presence in the mid-late game by utilizing the creatures in the mana/graveyard. 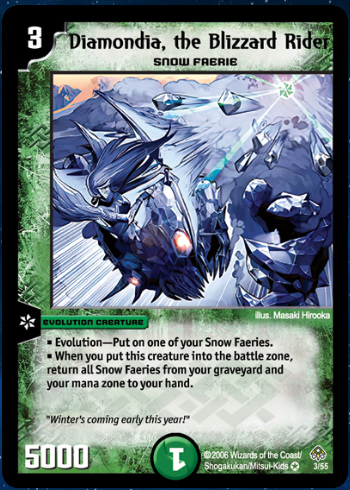 Q: Why utilizes Snow Faeries instead of predominantly Beast Folks in a mono nature deck?
A: I'm not saying having Snow Faeries in mono nature decks has a better chance of winning than having Beast Folks. I guess probably the win rate would be even greater with Beast Folks plus other draw cards like Brutal Charge. My deck's building process is actually starting at searching the under-utilized cards in DM TCG (beginning from the Super Rare, and then Very Rare ones, and so on) and see if they can pull off some combo or maximize their advantage in certain decks. It's not that I made a mono nature deck at first and then replaced Beast Folks with Snow Faeries. I just thought with this Diamondia being a "Very Rare" card that is never played in DM TCG, can I try placing it in a particular deck that might make it work? In the end, I decided to place it in a mono nature deck, to reflect the fun element of including it. Maybe there is better synergy if it's used in multi-civ decks, but I haven't tried it yet.

Q: What particular advantages does the Diamondia have in this deck?
A:
Advantage 1: This deck is positioned as an aggro deck. Diamondia can help you recycle the Snow Faeries that are often weak and killed by opposing creatures/spells if they want to stop your aggro plan.
Advantage 2: Mono nature deck doesn't have much draw power. Diamondia can help you replenish the hand by recycling the creatures.
Advantage 3: It can be used to increase the number of bodies on your field, because the recycled creatures are usually 1  drops and 2 drops (Polligon and Garabon) which you can summon within the same turn.

Q: Any support cards for Diamondia?
A: I have added some search cards (e.g. Rumbling Terrahorn, Charmilia) to search for the Diamondia. I preferred to have a body, rather than a spell (dimension gate). Charmilia is a pretty slow creature which I personally don't like vey much, so I only added 2.

Other discussion points:
- although Natural Snare is not the best removal card, it's the few good removal gards in the nature civ; the purpose of soulswap is mainly to remove strong opposing creatures
- BAT and Quixotic are still played because they are as good as usual
- weakness: can lose to any decks I guess...although it can still win if it's fun decks vs fun decks
- other cards like cannon shell and raging dahs-horn are there to give opponent some pressure

If you want something different to be played, you can try adding Neve, the Leveler, (a snow faerie) although you need to make other card changes to make it fit into this deck. 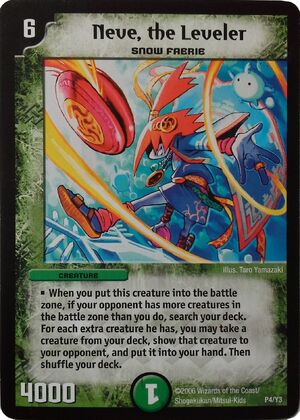