One of the reasons i always preferred Duel Masters instead of Magic the Gathering, Yugioh and Pokemon is the artworks. DM has some of the most amazing artworks i have ever seen, with everything from funny cartoon looking creatures to the most dramatic bombastic artworks i have ever seen in a card game. So i figured i would make a list of my top 5 favourite artworks in the game. So many cards could have been on this list, it is crazy! But i finally managed to cut it down to 5, and here we go!

Starting off with a very obvious pick, and a true fan favourite. Ballom is probably together with Bolshack Dragon the most famous card in the game, and the most iconic villain card by far. Although its not among the best cards anymore, it is completely unforgettable. The artwork is amazing, and really fits its character and civilization. It looks like the ultimate evil boss, which in TCG it also is. Its effect i also very fitting, killing everything but its darkness servants upon its arrival. A true evil boss monster with an amazing artwork.

Although not nearly as much of an icon or as famous as Ballom, i actually find this artwork more impressive, and the card itself is better too. It makes me want to build a deck around it, which i probably eventually will. The thing looks like a more realistic Ho-Oh, with two swords and a lot more detail. It doesn't look evil, but more like a very powerful deity or something from a legend. I absolutely love everything about the artwork, the colour scheme and the fiercy look in its face. An easy pick for this list.

I just couldn't separate these two... They are so similiar and have basically the same qualities (artwork wise that is). So i decided to give them a shared 3rd place. These two dragons are two counterparts, one good and one evil one. The artworks are absolutely stunning, they look like twins with one being alive and the other one dead. They both look old, and super powerful. The actual cards are not very great, but the character these two have is so unique. They are must have trophies for every folder, and easely got their spot on this list.

Seriously.... they have done such an amazing and terrible job with this card at the same time. The artwork on this random rare card is one of the best i have seen in any card game. It looks like the mother of all evil, as well as looking extremely powerful. Such a damn shame that this card sucks in play, cause it would have been one of the coolest cards ever if it was good and perhaps even a super rare. I was shocked the first time i saw it, and everytime i ever see it again, i also think like "Damn that card looks great!". Bad card, but what a freaking perfect artwork. A well deserved number 2 on this list.

Yeah i knew all along what would be my favourite pick.....
The picture on this card just looks like "Death" with wings. It is the most dramatic and well detailed image i have ever seen on a card. Usually when cards have this much details on them they just look messy and just too much. But somehow they have achieved perfect balance here, in my opinion. Ever since DM12 came out and still to this day, im shaking my head that they didn't make this a good card. It should have been on the level of Wise Starnoid, and maybe even better. If they had just made it evolve from a Fire bird + any creature with dragon in its race or any dark creature or something, im pretty sure this would have been the best evolution creature in the game. It has devastating effects, and it would have complemented its artwork so well.... Easely the best art in the game in my opinion, and it even surpasses my favourites from other card games.


What are your favourite artworks?
DM_globalveteran 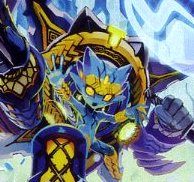 well, any thread with top 5 or top 10 stuff, especially card art, is endless discussion joy. while i loved to have that contrast of truly detailed game art when compared to poke-yugi (but both games improved!!!), i noticed how the creative approach shifted after the DMR era. DM might have had trouble attracting new generations in Japan, that's just my silly theory, so the more cartoonish style was brought to the front. "Classic" or high-fantasy design was pushed to the backseat. A more balanced product design would be better. some of the recent sets show n INCREASE of classic art, maybe that is due to games like Vanguard, Buddyfight, Battlespirits, even Magic also improving, with Magic releasing Godzilla themed high-fantasy cards.

there is only one step or mountain to climb for DM. an all-inclusive new story or universe where Bolmeteus designs, disney cartoon Joker monsters and humanoid paintings like Sangokushi Taisen would equally coexist.
LordSommerhill

@DM_globalveteran yeah i dont know much about the stuff from the OCG, but i have seen both cartoonish designs and some more old school DM designs as well. Anything can work though, like Pokemon has managed to create many good designs even though are super simple, and yugioh has taken more of a combination of both again. Its all preferences i guess, but i always found DM to attract me the most when it came to designs.
Sponsored content

» List of TCG Promos and alternate Artworks in OCG