Description
The only card I wanted to mention in this deck is Agira. I teched it as an option to summon a 5500 power creature in turn 4 to deal with other creatures, especially aggro-ish deck types. As soon as Ailzonius hits the field and Agira is still alive, Ailzonius goes up to 10k and would be able to run over another Ailzonius or other enemy creatures.
Bingole as another bait and good against our heavy discard meta. For this deck I used Magris instead of Hulcus because you ether want to play Syrion or Stream in turn 3 to play e.g. Kolon in turn 4 to get rid of an enemy creature. Magris is good as a second turn 4 play to get the draw for Ailzonius.
A playset of Surfer and Holy Awe and three Kolon to use with Emeral to set up some shields and against rush or tempo decks.

Thoughts
Why no Hulcus?! Well, because I need the turn 3 to play ether Syrion (which would be an ideal play) or to play a draw two stream. Magris is a bit stronger than Hulcus and fits perfect in the curve. 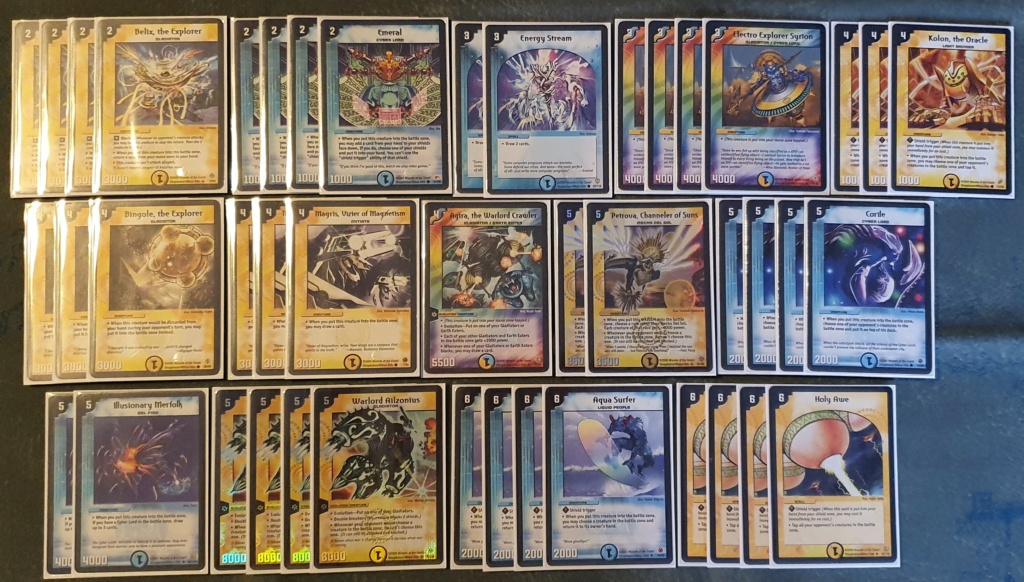 in my opinion Ailzonius is the best evo creature in the TCG and wins games all by its own. So I would maximize your odds of playing Ailzonius on curve (T5). You achieve this by either reducing your deck size to 40, increase your card draw before T5 or both.

This is why I would include Hulcus. As you rightfully titled: LW Ailzonius is an Aggro-Deck. This is why you want to play creatures early. You only have 6 3-drops (4 of them are creatures) but 12! 5-drops. I suggest cutting some copies of Merfolk, Corile and/or Petrova and add Hulcus. Hulcus fulfills both roles: An early creature that can attack and a card draw that gets you closer to Ailzonius on curve. Therefore I would also play 4 Magris and 2 Kolon/Bingole.

I see your point with Agira. In my opinion you already have a really good matchup vs Aggro because of 4 Surfer, 4 Awe, 4 Emeral, 4 Belix and Kolon. Furthermore you don't want to play Ailzonius on an already evolved bait. You very rarely hit the dream of Belix->Syrion->Agira->Ailzonius and if you hit them one of the baits usually isn't on the field anymore. If you want to go further on the Agira-route tho I suggest adding 4 Belmol and another Agira.

I hope there are some suggestions for your further deck building process.

Good points my friend, thanks for your suggestions.
4x Holy, 4x Surfer and 4x Corile were definitely not a good option for such an aggressive deck. After some matches I already made some changes:

After some games IRL it worked definitely faster and smoother, thanks for your suggestions.