Portuguese TCG:
-DM-01 and DM-02 were fully translated.
-Starter Deck 1, Shobu's Fire Deck and Kokujo's Darkness Deck were available in Portuguese. (The Portuguese Starter Deck 1 was based on the OCG version, and does not have any promos in it.)

Thanks to ELTP who provided much of the information here.

I'm glad that I could be helpful!

I actually were missing two of these. They weren't my top priority but after having got pretty much everything else, I should get those two I'm missing (In German at least).

I have started creading decks keeping these non-English cards. It has actually lots of potential and I even managed to come 2nd in a tournament we had today. The plus side is that these cards are all pretty common.

This thread should be helpful for anyone interested in German, Spanish, Italian or French versions of cards.
loui-mh

Thank you @Haiken and @ELTP, this list really helps to find some missing cards!

Since I've started to collect the non-English cards more seriously, I've noticed that the previous information here was lacking. I've updated the original post. It should now be more accurate. 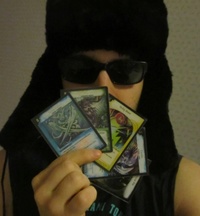 Hm, I've always associated the Chinese cards with the OCG since it is in Asia and doesn't have any of the TCG decks (as far as I know), but I suppose it wouldn't hurt to add it regardless.

I would need to gather more information about it, since I'm unsure about promos and decks when it comes to the Chinese cards.
Sponsored content