[OCG] What does anyone think about Giovanni Squall?

[OCG] What does anyone think about Giovanni Squall?

I know i am a little bit late on this since the guy is about to get his well deserved direct ban but i just want to hear people's opinions about Giovanni Squall. As of you don't know, it's a deckout control that is very abundant in the OCG meta since the September of last year. It involves recycling Drill Squall with the effect of Giovanni the 10th and it also has Oriotis and Oriotis Judge to destroy Revolution change decks and Hibiki to destroy spell decks, and Tulk's spirit Reel to stop deckouts while it ensures your opponent deck out. Usually in irl duels for some reason there's also at least 1 copy of Hyperspatial Musha Hole, although in TCO it works well without it. Recently people also added cosmic darts onto it for some reason.

If you don't understand what is going on, here is an example of me playing it. 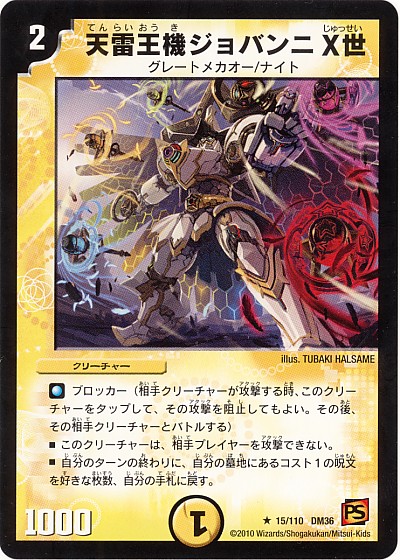 Blocker (Whenever an opponent's creature attacks, you may tap this creature to stop the attack. Then the 2 creatures battle.)

■ At the end of your turn, return any number of spells that cost 1 from your graveyard to your hand.

What i think is it's totally insane after i played it myself on tco. There isn't much ways to get around the lock once it stables itself and if you get a really good hand there's not much that can stop you in time. DF Deadzone/Dormageddon will get torture locked pretty quickly and so does Darkness Fire Busters. 5c Buster have to use Yell Life to remove Giovanni or it will be dead at no time and even then the opponent can revive it.  Swarm Rushes like Southern Renaissance will be crushed by Mega Magma Dragon. It can even deal with ramps too, although it has to be quick before opponent stores enough mana. Also unlike real loops it's very easy to run and i can run it even if i am horrible in real loops like Heaven's Gate loop and Goemonkey Loop.

The only good thing is as far as i know only i am using it for an extended period of time on tco and the kill rate is 80%, i only lose because of bad shuffles. But in real life it's literally madness because the shuffles aren't rigged so you are more likely to get the lock out before your opponent brings in good offenses and even then there's Oriotis Judge and masses of blockers to keep the opponent at bay.

I'm actually pretty grateful that it has been banned so people cannot troll in irl but in TCO it's not commonly seen so another one of my decks are dead. Good outweighs the losses however because it makes the game less annoying to play in the future.

Excellent introduction to the topic! Based on what I have seen and heard about Giovanni Loop, it really deserves the direct ban. Giovanni is an amazing card; I also had a Giovanni - Drill's Squall deck years ago but it didn't have the support needed to thrive back then. No way around it, Giovanni Loop was too good to be allowed with the current support cards it has. Still, it's a pity in a way.

A bit off-topic, but I don't understand why people are complaining about the shuffling system on TCO. It certainly is more random and reliable than shuffling a deck using your own hands. It's just a bunch of code, an algorithm, which does the job it's intended to. I haven't noticed anything that couldn't have happened outside the system.
DarknessPony

I recall some of my Finnish friends using Giovanni Squall -ish decks before against me, but back then those decks lacked Oriotis aid and had 3-4 civilizations, since the focus was not on the mana lock. Now... that deck can rot in a fire as it well deserves, hence why I avoided on TCO anyone who used it. Good riddance.
Sponsored content