I was gonna add a tag of [Upcoming Set], but apparently titles have a character limit. Good to know.

Like the DMX-25 set released before it, as well as most other DMX sets, its generally a reprint set. So not many new cards are expected. It has 69 cards (3 Legends, 8 Victory, 4 Double Victory, and 54 other.

The set like its name suggests a focus on cards from the previous 3 blocks; Dragon Saga, Revolution and Revolution Final.

Many of the cards we currently know are from the Gaiginga series of creatures, but also some Miradante/Dogiragon as well for Rev 0 Triggers. Some Forbidden focus is expeected as well, and I personally hope for more cards in Forbidden Characters.

The last set had 6 new cards, and currently this one has 4 (possibly 3, depending if you count New Generation).

One of the things I wanted to post about was the hilariousness of the Please Marry Me! card.

■ Happiness Switch - At the end of your turn, you may turn this happiness field upside down. If you do, propose to your opponent. If your opponent replies "OK", both players will be the winners of life.

While fairly a useless a card, the idea behind it is so silly. Obviously based on the events of Katta / Lulu marrying within the timeskip of the anime, which leads to the new protagonist Joe Kirifuda for the future seasons)

It has no actual effect on the game at all (like the Great Waste or "yen" dragheart fortressess from DMX-22, it cant even remove other fields in play (as that 1 field rule is exclusive to D2 Fields. And there are cheaper ones anyway...).

But having both "wrapped in happiness", "propose to your opponent" and "winners of life" on card text just make me laugh.

Its very similar to the Proposal card from Magic, but this one will be a bit more common...

Since revolution and revf is still in the dash golden list and there are not many useful super rares in ds, i doubt there will be many reprint cards at all. Plus unlike the previous one i think there will be a more joke-ish content.
Yami_Michael

I suppose that is possible too. Should have more spoilers right around valentines next week before it comes out. Have to wait and see
_________________

I should be able to make it less limiting so that it had more characters.

EDIT: updated the character limit and the title.

Well, this card is really something. It has a bro-mance vibe on it since the wording is "ok" and "winners for life" but that could be used else where too especially in the anime

It will be interesting to see what kind of value can this a mainly compilation set bring us.
Yami_Michael

Yeah, the weird thing is for it to be in an regular set that isnt a DMX or promo pack. But I'm sure its just because its a celebration of an "end of the katta era".

Although, "fun fact", Duel Masters is secretly sexist (I'm kidding). But if you ever look at any English cards, and untranslated Japanese cards, they only ever mention "his". Some cards get "their", but its usually chosen to use "his" because I'm uptight with being consistent on previous cards and the english templating.

Kaijudo used "his or her" though.

Please Marry Me! is definitely a weird card but like you said most definitely created for the anime.

In English you don't usually differentiate he and she and simply use his by default when refering someone generally. It's just convenient but then again if they used she by default, it would feel weird, at least at first.

PS. You'll get a hang on it, I have made the same mistake a couple of times myself.
OcaVan

I would play the card 'New Generation', sounds like a cool idea, makes the game atmosphere easier and more relaxed. But how do i call fun cards like Please Marry Me! or 'New Generation'? Trivia cards? anime cards? Are they even allowed? Would be sad if they were'nt allowed

OcaVan wrote:I would play the card 'New Generation', sounds like a cool idea, makes the game atmosphere easier and more relaxed. But how do i call fun cards like Please Marry Me! or 'New Generation'? Trivia cards? anime cards? Are they even allowed? Would be sad if they were'nt allowed

Very likely they won't be allowed. Also be noted that New Generation's effect is optional for all sides, so you can't use it to deck out the opponent.
Yami_Michael

I could see New Generation possibly not allowed, but "Please Marry Me!" does nothing, regardless if they say "OK" or not. It just...sits on the field.

I don't really see reasons why you wouldn't be allowed to use New Generation in official duels, it's not that game changing: just some optional drawing for both players. Or maybe I'm missing a combo here.

I keep learning new stuff from DM Wiki almost every day, it seems. Scissor Eye is a godly example of a trivia card

No combo or anything really, just that it had a physical requirement to it (even if shaking hands is "easy").

Good point Yami Michael, that was what I was missing. They probably would at least disable the hand shaking ability in some tournaments if not the whole card.
OcaVan

yeah but it's still a fair card in a regular duel. Are there more fire spells like this? I just know the effect of shuffling your handcards into your deck and draw the same amount again 'Cyclone Panic'.
I missed so much sets, so i have no clue if this is the first fire card that allows to draw more cards.
Yami_Michael

Every civilization can draw cards. Water is just better at it. Light/Nature get it secondary, and Darkness does a little more behind that (but with suicide abilities), and then Fire.

Card Draw has all the different card draw stuff.

A new takaratomy video gave us the news of End of X and Iron Fist of Revolution being reprinted as well. They form a combined art. 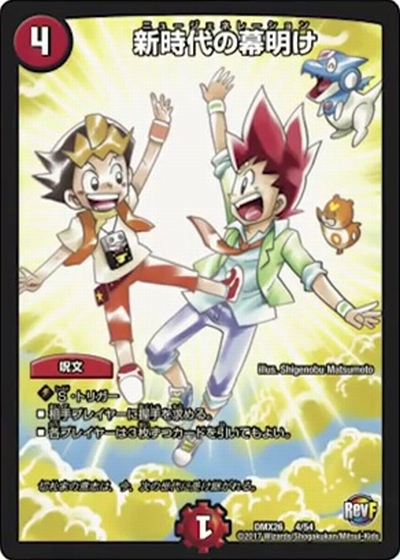 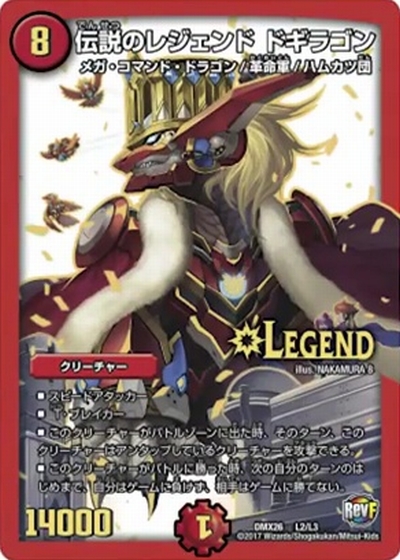 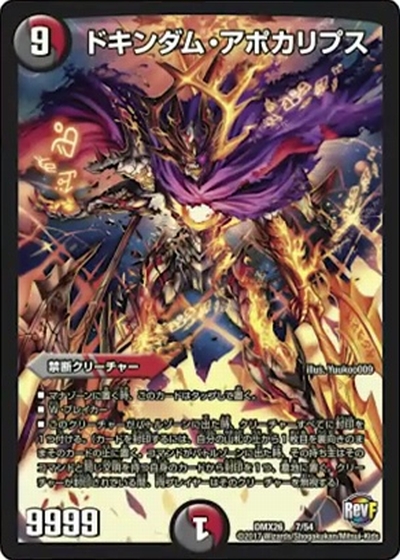 The End of X and Iron Fist of Revolution 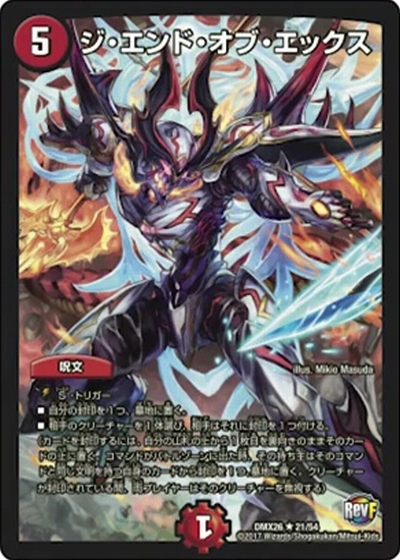 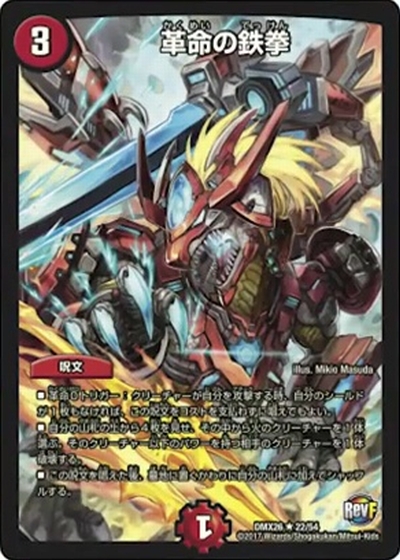 This is actually getting rather interesting. I like how the artworks of those two cards combine that nicely.
Yami_Michael

Its a shame its on spells and not creatures (or you could have them on the field together), but they are always nice (as is full art cards in general).

You could put them side by side after casting, but would be better if these cards could actually stay in the battle zone or on shields.

MtG seems to have lots of these "polyptychs" and I suppose Gods were first such cards in Duel Masters. Oh right, also some theme decks had a larger artwork that was used for single cards but it might have been a bit different since it wasn't symmetrical and card illustrations were over-lapping.

Around a week until the release and there are still many cards we don't know. Soon we should know.
Yami_Michael

Usually its the CoroCoro in the middle of the month that gives us the info (this one being the 15th).

We actually got some leaks today!

New leaks... and from the next block! I'm looking forward to more updates!
Yami_Michael

Wow, I'm jealous that Japan has these cool albeit nerdy Duel Masters events. Would love to visit Japan for something like this.

The World Hobby Fair is a convention type thing for a bunch of other games, but they have had DM-tourney events as part of it for many many years now. IOn other years, they were black box pack related, and people were given random packs of it. So spoilers for that day were a lot of shared information from twitter pictures trying to piece together the crazy set.

You get takara/shogukan and get all the sorts of stuff like transformers, zoids or beyblade...and then you get other big companies like Bandai and Nintendo.