Hi, today I want to share with you a fun deck, the GRUB Rebirth Midrange Deck.

This is perhaps the most difficult build I have ever made, since it plays 4 civs in a 40-cards deck. The civs needs to be balanced, as well as the mana curve. Being a midrange deck, it is also in a disadvantaged position against 40-cards aggro decks and > 40-cards control deck. It requires accurate judgement of deciding when is the best time to go in and attack shields, and therefore you also need to know well about your opponent's deck and predicting your opponent's next move. Perhaps in the best hands (mine not included), this midrange deck (or similar build) may do wonders (in the right match-up).

One more thing, I intentionally leave out light, put in water and keep it at 40-cards, as I think the usual BAT + soulswap + Skysword + Phal + belix +/- Forbos +/- Mist Rias style of control play is kind of undermining the game a bit and is too commonplace. I personally have a LWDF Rebirth Midrange built, but I don't usually play it, for the sake of fun and challenge.

This deck is by no means complete/perfect. Changes were just made, and likely will have new changes in future. This is the fun bit of making this deck as nothing is absolute.
So let's have a look at the deck 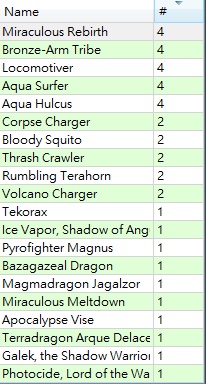 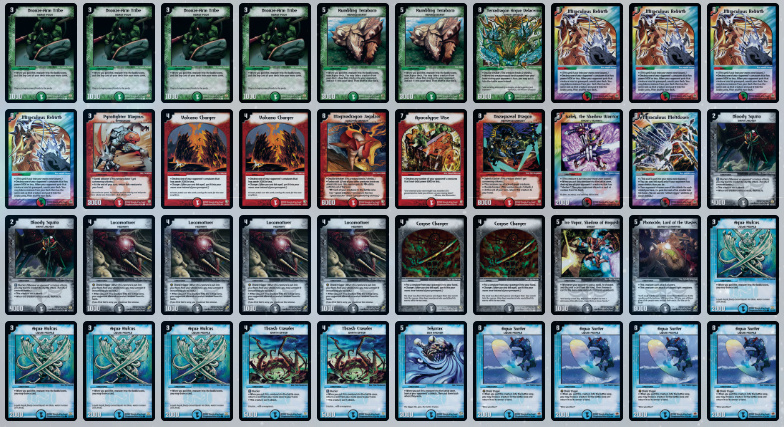 Strategy of this deck:
1. Make use of Miraculous Rebirth to play creatures and utilize their come-into-play effects or amazing static ability to either gain board presence or control your opponent.
2. After creating sufficient board presence, swing in for shields (and go for game) at the right timing.
3. If it is impossible to achieve the above, contingency plan = Meltdown + Magnus play. Before having both cards in hand, try the best to stall the game to buy time.

Based on the strategy above, you can see that this deck is of a Midrange built, as it does not rely on creatures attacking early and at the same time it lacks the vast amount of spells needed to control your opponent in the late game. In summary, you have to finish before the control decks gain the upper hand, and have to control your opponent before their aggro decks defeat you.

Perhaps someone may say running 4 Surfer, 4 Loco, 4 Rebirth might seem too much (especially Rebirth). I also struggle for some time, with frequent changing of cards for the last surfer/loco/rebirth. But the final built decided to go for a more consistent play and go for more creatures (i.e. surfer/loco) to accommodate the use of 1 more rebirth.

Some of the card choices worth discussing:
Before going into the card choices, note that for every change of card choice, you also have to consider the mana cost and the number of civs (whether it is well-balanced).

Bloody Squito:
- the only 2-drops in the game
- purpose: to hold off opposing aggro creatures; it is perhaps the best blocker in this deck, as it is cheap, high power, gives a darkness mana. Being a 2-drop allows you to play it when you play Rebirth on opposing Emeral, Gonta, Quixotic Hero, Melnia etc.

Magnus + Meltdown:
- this old-fashioned combo saves me in a lot of the aggro/rush matches. The magnus is just to play safe in case your opponent play light and there could be Holy Awe in shields.

Thrash Crawler + Corpse Charger + Volcano Charger:
- the interaction between these cards is great as you can reuse them with the help of thrash crawler
- running 2 thrash crawler is necessary to ensure consistent play of such strategies

Apocalypse Vise, Bazagazeal Dragon, Photocide
- Apocalypse Vise = the sole mass removal spell in this deck for clearing the boards
- if space allows, I will definitely add in one more. The need for mass removal, however, is diminished in this rebirth deck, as the 4 Rebirth can kill some of the big creatures too
- if your opponent play light, it is likely that your opponent will play Petrova in aggro decks/hydrohurricane decks to boost power, or a bunch of Yuliana in control decks. This deck will therefore struggle a lot as they cannot be targeted. To solve this problem, the only solutions is the Bazagazeal dragon to attack them and the newly added Photocide which is only 5 cost and therefore can be played by playing rebirth on your opponent’s Mist Rias, Phal, Skysword etc.
- Photocide is also good in going over big creatures like Ailzonius, Bluum Erkis, in which Bazagazeal will have a difficult time in killing them

Ice Vapor:
- a must-have against spell-heavy control decks; its static ability is just amazing
- it can slow down your opponent when they plan to discard you with clamp or lost soul; they must find a way to kill it first, otherwise it would just hurt their mana and hand

Jagalzor + Tekorax
- Jagalzor is a cheap finisher when you have sufficient board presence; itself is also a 6-drop, so a good Rebirth target on Forbos, Surfer, Bliss Totem, Gajirabute etc.
- Tekorax allows you to evade the shield trigger that may potentially hinder Jagalzor from attacking when normally you would blindly attack a shield with your other creatures. Tekorax alone without Jagalzor as finisher is also great as it allows your small creatures to evade from shield trigger, so that they can survive another turn if you cannot finish your opponent in one turn. It also gives you reassurance when you otherwise have to hesitate whether your opponent will have shield triggers in his shields that can turn the tide before your weak little creatures can go for game. It is a 5-drop, also good for rebirth targeting.

Weakness of this deck:
- inconsistent play because of the great number of 1-off cards
- no light cards, therefore no access to spells in deck, mana zone, graveyard
- decks consists of mainly weak creatures, vulnerable to fire mass removal spells and opposing creatures
- rely on your opponent to play creatures; in decks like RUB control, may not have great Rebirth target if they don’t play creatures
- limited shield trigger for defence: no pits, no soulswaps etc, have to rely on blockers, surfers

It's a long discussion. Better save the remaining discussion next time.
In future threads, I will further talk about other card choices and why I don’t include them in the deck.  Will probably discuss ~ 20-30 cards
See you next time!
madmicro0430

Some may think the draw power of this deck may be insufficient, therefore they may suggest Cyber Lord + Illusionary Merfolk play to increase the draw power. However, there are a few disadvantages:
- it will take off one of the few important defense creatures in this deck, making it vulnerable to Aggro/rush decks.
- the Cyber Lord + Merfolk play will substantially tip the balance of the 4 civs, making it too heavy in water.
- to better play the Cyber Lord + Merfolk play, also need to add in cards like soulswap to ensure you can achieve the play, but there is no space for nature cards either; and any spells in this deck cannot be searched, or retrived from the mana or grave in this deck without light, which isn't ideal for soulswap here.
- surfer being 4 of the 8 shield triggers in the deck have a good chance of being put into the mana zone as the water mana for summoning emeral if you draw emeral and surfer at the same time (since it is difficult to a 3rd water card at the same time, but you probably won't have another shield trigger in your hand for you to manipulate your shield with emeral. So you either have to wait for another shield trigger to come to your hand then play emeral, or simply putting the emeral on the field without putting a shield trigger into your shield. Either play isn't that great.

A potential option to replace squito would be Kelp Candle, being a 2-drop as well. But it has a lot of downsides:
- only 1k power, can't really block aggro from attacking
- its effect only works when blocking rather than being destroyed, making it vulnerable to single or mass removal cards without activating it's ability
- adding more water mana again makes the civs unbalanced

Therefore, the old-fashioned squito is still the best blocker in this deck.

Hurricane Crawler:
I have tried out Hurricane Crawler in this deck, which I have also played in one of my mono water decks.
This cards is only good when you have so many cards in your hands such that you can get back most if not all tapped cards you used in the mana zone to summon Hurricane Crawler and then used the untapped cards you just put into the mana zone from your hand to play cards that you have just retrieved.
This deck don't have such draw power to achieve such play. Very often, you have to wait a turn to play the card you have retrieved, but your opponent would have known your next move or discarded your card already.

Saucer-head shark:
Nice card against aggro decks.
This card can allow you to play your hulcus, BAT, loco again to utilize its come into play effects, but your opponent can do the same, and they can do it first.
In the current heavy control meta, playing this card only gives advantage to your opponent, as they got to play their BAT, skysword, loco etc. first. So not the best card to replace tekorax.

Corile:
A strong card in control deck as you can discard your opponent first and then lock your opponent with Corile.
But this deck don't have that heavy discard strategy to support corile.
Sometimes this deck may have to go aggro earlier than your opponent, leaving this card of much less utility (Tekorax on the other hand can inform you of the opponent's shields when you have to go aggro).
Also, we already have enough removal cards for this deck, e.g. surfer x 4, rebirth x 4

Feel free to leave your thoughts below :)
« View previous topic · View next topic »