Actually I have created ~10 versions of it, with different evo creatures in each version. The staple cards are roughly the same, with some changes necessary for synergy.

To avoid giving just a superficial discussion on each version, the post will be updated with different versions of the deck from time to time, rather than posting all of them at one go.

So today let's start with the one that is perhaps the strongest version out of the LWD Marino Aggro Deck. 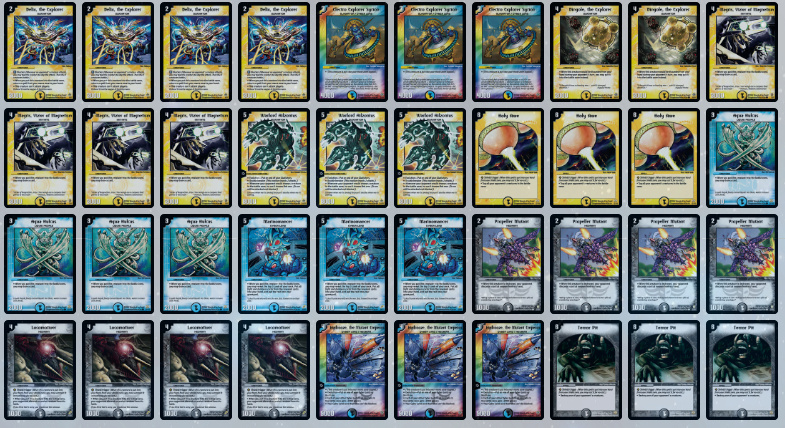 You can see it's kind of a mixture of the Hydooze deck and Ailzonius deck.

The reason why I think it's the strongest LWD Marino Aggro deck (among my own creations) is because it has the two strongest evo creatures: Hydrooze and Ailzonius (in my opinion: Ailzonius > Hydrooze)

Game plan is simple: to break shields with strong creatures (that are powerful, unblockable and cannot be chosen)

You may argue more 2/3-drops can be added, but I think after considering other factors, e.g. effective evo baits, color of civs, the cards needed for late game aggro, I think now it's the perfect balance.

Evo baits:
For hydrooze: while propeller mutant and loco are commonly played as evo baits in the traditional WD Hydrooze deck, note that marino and syrion are also evo baits for hydrooze in this deck as well! In total there're 14 baits for hydrooze. Syrion is particularly great as it serves as a evo bait for both hydrooze and Ailzonius

For Ailzonius: total 9 evo baits for Ailzonius, short of 1 Syrion that is normally present in the traditional LW Ailzonius deck. This is to avoid having 7 multi-colored cards in the deck which can be bricky.

Ailzonius x 3 and Hydrooze x 3 is probably the best ratio. 4:2 or 2:4 would damage the paralleled strategies. The intention is to have both Ailzonius and hydrooze in succession within the same game to give your opponent a hard time. It's not like one is the main strategy, while the other one as back-up.

Draw cards:
Magris x 4
Hulcus x 4
Marino x 3
Such ratio of draw cards is probably necessary against heavy discards and to sustain the continued aggro pressure. I don't think cutting any one card is ideal.

Multi-civ cards:
The 6 multi-civ cards can sometimes be bricky in the early game when u draw 2-3 of them in ur starting hands.

Almost always I will have a multi-civ card in the starting hand, and that card definitely will go to the mana zone in the first turn, particularly hydrooze as it's useless in the early game without board presence.

This problem is also dealt with by the large amount of draw cards, which guarantee you have mono-civ cards to be placed in mana zone even from turn 3/4 onwards.

Overall it's quite well-balanced I'd say.

Hand guards:
Bingole x 2
Always good to have hand guards in aggro deck.
Arque is not included here as it will be discarded by Marino. Bingole = good evo baits + good marino draw.
In my other LWD Marino decks in which gladiator baits are not required, Dava Torey would be hand guards of choice.

Weaknesses: in essence, compare this deck with the traditional LW Ailzonius and WD hydrooze deck, then you will know the weaknesses

1. No shield manipulation with Emeral. Becuz of the need to limit the water civ, Emeral is out of the picture. You then can't make sure u have an awe/pit in ur shield, which is a pity.

2. No surfer. For similar reason as above, unfortunately surfer is out, which is a damn gd card in aggro deck. It's replaced by terror pit.

3. No low-cost removal cards. No kolon, spiral gate, unicorn fish, corile etc... The first effective removal cards are awe/pit in turn 6. Might be a bit too late against other aggro/rush decks.

4. Chance of decking out against control, especially when you only draw Marino in the late game. A late game Marino is pretty saddening as it means you don't have the draw engine kept going for continued aggro pressure in mid-game. It also means a high chance of decking out.

5. No petrova as buff. Because of tight space, it has to be cut.

It's a long discussion. Hope you enjoy it. Feel free to leave comments below.
« View previous topic · View next topic »