The weak part is you have to rely on your opponent to attack your shield for it to work, so basically only great against aggro decks. (But there are still some ways against control decks)

The fun part is when you see a ST that is going to help you, you'll just feel today is your lucky day, and that feeling is awesome.

So here is the deck list. This deck plays 40 cards. 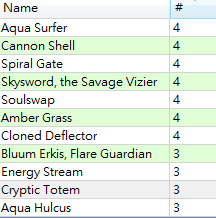 Discussion:
1. The choice of civilization (LWN) is rather arbitrary. Fire and Darkness both have fascinating ST as well as finishers. Some great points about LWN ST in this deck will be discussed below.

4. Cannon Shell can be a big problem for your opponent if they don't go for shield at all. It may give your opponent some pressure, although a good control deck can actually handle the cannon shell pretty easily.

6. This deck requires big finishers that can play around with shield triggers, because most of my creatures are not strong ones, and they can be easily removed. Note that Cryptic Totem and Bluum Erkis effects do not contradict one another. Details see: https://duelmasters.fandom.com/wiki/Bluum_Erkis,_Flare_Guardian/Rulings

7. Some other LWN ST to consider:

- Holy awe is probably not necessary, because we have cheaper version of it - the cloned deflector. We have many 6 drops in this deck already. And if your opponent realize your deck is a ST deck, s/he probably won't go for your shields that quickly to hit an awe. Also you won't have many creatures on the field for you to clear the opposing board with holy awe.

- Kolon was originally included, but I realize I won't have strong creatures to attack the opposing creatures when using Kolon's tapping ability. Since then I added cloned deflector, a more effective tapping card, and replaced Kolon with Amber Grass instead.

- Skydiver is a great card, but I guess having too many multi-civ cards will just screw up my mana in the end.

- Miraculous truce: unless your player is playing mono civ decks (like I often do), it is not a really great card; i would rather have cards with removal ability or tapping ability so that they are either gone, or I can attack them after being tapped.

- Mana nexus: I don't really like this card because your opponents know what your shield is so they can play around with it, and it screws up your mana.

- Dimension gate: a pretty good card that can allow you to know your shields, regrettably no room for it; if I make this deck to 45-50 cards, I will certainly add it.

8. This deck is only playable in fun environment. Weak against every competitive decks.