Hi again. Today, I want to share two decks with you, both playing dragons.

I know there are people who have some degree of attachment with dragons, probably because of the anime series. "Dragons are strong, unbeatable, and once they are on the field, they are invincible," probably some thoughts like that as well.

I personally don't play dragons myself (at least not as key creatures), because they are relatively slow. You probably can see from my previous posts, that I am fond of Aggro decks more, playing small creatures and go for shields. But still, I have two decks with dragons which are relatively fun. They are suitable in a fun environment, not so for competitive ones. Both play 40 cards.

The first one is perhaps more traditional: FN Dragons 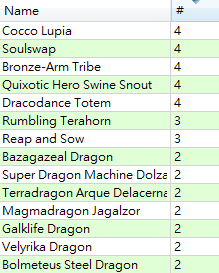 Discussion:
- It maybe is a bit counter-intuitive to play quixotic hero in this deck, since this is not an aggro deck. But I guess I need some strong creatures to counter aggro decks in the early game, given the limited shield triggers and the small creatures being only 1k in power.

- Dracodance Totem is a rather neglected card, probably because in TCG we also have Kyrstron, Lair Delver, which has a much stronger effect than the totem when it is destroyed. But in this deck, I think there are sufficient 5 drops already. Perhaps some search cards (Rumbling Terrahorn) and mana acceleration (Reap and Sow) is more important for you to reliably summon dragons. But I guess there are room for adding Kyrstron if ultimately you think it's necessary.

- If you think that there are too many dragons in this deck, I would suggest cutting the Jagalzor, because it usually does not gain you advantage if you attack your opponent too early.

The second one is more fun in terms of the civilization and the luck that is required: LWFN Dragons 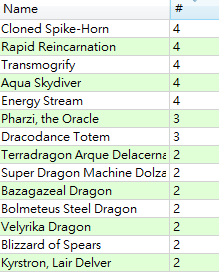 Discussion:
This deck makes use of Rapid Reincarnation and Transmogrify to summon big creatures. There can be a lot of combo:
- If you use RR on Dracodance Totem, it is legit to first get back a dragon from the mana zone with the totem's effect, and then put that dragon that you've just got back onto the field with RR's effect.
- If you use RR/Transmogrify on Pharzi, it is legit to retrieve the RR/Transmogrify you just used.
- If you use RR/Transmogrify on Aqua Skydiver, you can return it to your hand without wasting a creature.
- If you use RR/Transmogrify on Cloned Spike-Horn, you can actually use this as an advantage, because other Cloned Spike-Horns you have on the field will become double breaker. Cloned Spike-Horn can also function as a strategy to counter discard, along with the 2 Arque.
- If I were to play Bajula in this deck, there can also be combo with RR, Kyrstron and Velyrika Dragon. You can first destroy your Kyrstron with RR; with Kyrstron effect, you then put Velyrika Dragon from your hand to the field; then with Velyrika Dragon's effect, you can search for Bajula; then with RR's effect, you can put the Bajula onto the Velyrika Dragon you've just put onto the field. Perhaps such combo is more playable if I only play 3 colors (i.e. cut the nature cards) in order to play Bajula.

In terms of weaknesses, there are a lot of problems when using either of these decks to play in a competitive environment, because they rely on combo and late-game strategy. I suppose you can imagine if your opponent plays a lot of corile, cranium clamp, lost soul, it can stop a lot of your strategies from happening. Also, they are still pretty weak against aggro decks because of the lack of speed. They are also pretty weak against heavy control decks with bouncing and discard cards.

By the way, a Kachua deck with Mykee Pliers is a very strong Dragon deck. Since I know this deck only through playing with other players, I'd respect their idea and not post it here. It would just be a direct copy and paste without any changing/thoughts from mine, not a great thing.
« View previous topic · View next topic »

» [OCG Legacy Deck 2006] Bolmeteus Sapphire Dragon Deck
» LWFN Control
» The deck that got closest that got to Deck Of the Week
» Search Bombazar, Dragon of Destiny NM/M
» My inwards TCG Deck(Need help)