» Looking for NM singles (junk + foils)
by divergence Yesterday at 20:48

Hi, today I'd like to share with you a RUB aggro deck that is intended to be a bit more competitive than the two previously introduced decks.

Having said that, I think this deck is still only playable in the fun environment.

To be honest, if 3 colors have to be chosen for a competitive aggro deck, my 1st and 2nd choice would be FWN and WDN respectively, because with the nature civ, the card soulswap can allow great come into play effects and summoning creatures at a lower cost, and bronze-arm-tribe/wind axe etc. can allow mana acceleration to play more and stronger creatures earlier.

But my intention all along is to share something different from the (perhaps boring) metagame, so hope you guys can appreciate it

Unlike the previous decks that I have shared (mono water and base set RUB), there are no restrictions on the civ and set in this deck, so there could be a lot of alternatives for many cards. Feel free to suggest any changes

Let's look at the deck first! Some basic info about this deck is included in the text box in the image below. 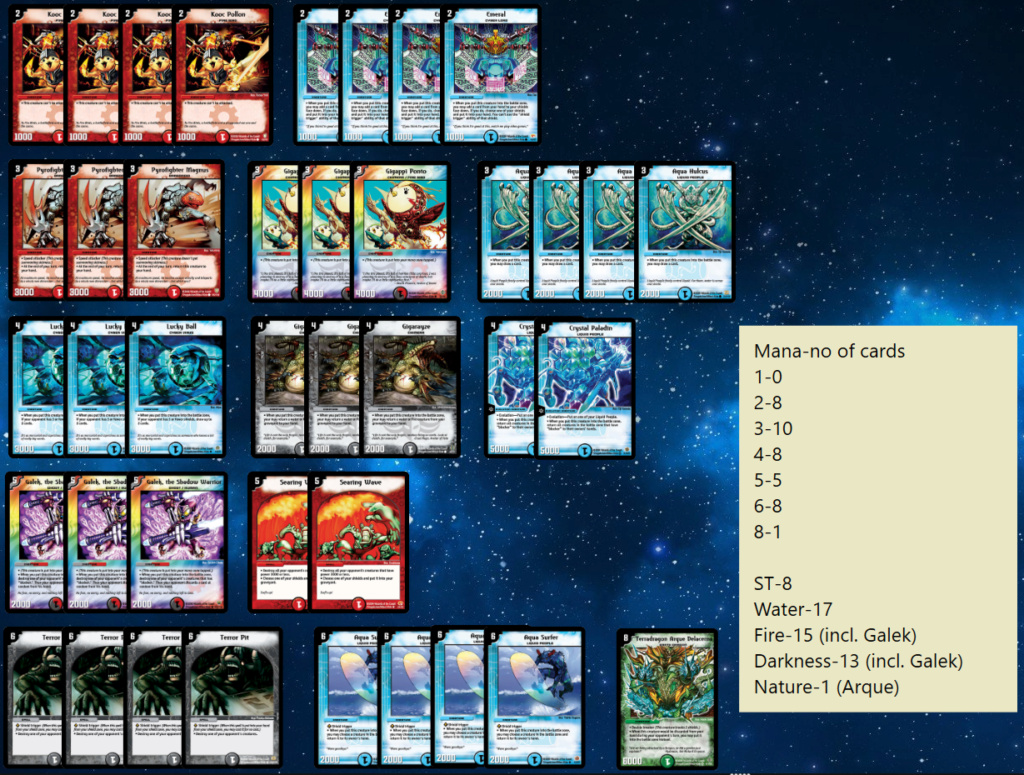 The game plan is simple: attack your opponent as early and as much as possible.

Now I would discuss the card choices and why I didn't include some of the cards. I would divide the discussions in several parts (mainly based on the mana cost).

2 drops:
Why Emeral and Kooc Pollon? Before giving my explanation, we can actually have a look at other potential alternatives.

Originally, I played 3 Kooc Pollon, 3 Melnia and 3 Spinning Terror. For several reasons, I changed to 4 KP and 4 Emeral.

Q: Why Emeral over Spinning Terror/Melnia?
A: Although ST is less easily destroyed by opposing creatures than Emeral, Emeral (but not ST) can be retrieved from the graveyard by Gigarayze. I can also abuse Emeral's come into play effect again. Although Melnia is great against big opposing creatures and can be retrieved from the graveyard by Gigarayze, your opponent can still attack it with weak creatures like Bronze-Arm Tribe or Hulcus in the early game if you attack with Melnia and it becomes tapped. Then, whether or not it is unblockable becomes somewhat irrelevant, because it doesn't survive long enough to demonstrate this advantage. This deck also has cards to remove opposing blockers, so again not particularly important to have unblockable creatures.

Q: What about Braid Claw?
A: Braid Claw is probably more playable when this deck has removal cards that are cheap in mana cost, like comet missle, volcanic arrow, spiral gate which can be played in the early turn, because no blockers will be in its way in the early turn. Unfortunately, this is not the case. Besides, you may not have the mana to summon Braid Claw in turn 1 in this deck, because many fire cards in this deck are multi-civ, and you might not even have another fire card as mana in turn 1, given the limited number of fire cards in this deck!

Q: What about Aqua Guard?
A: Aqua Guard is a good bait for Paladin and can stop early attack from opponent, but I consider the number of baits in this deck already sufficient, and I'd like to have something that can attack in the early game, which synergizes well with Lucky Ball.

Q: Why Kooc Pollon over Melnia?
A: The advantage of Kooc Pollon itself probably doesn't require explanation. But if choosing between KP and Melnia, KP will still be my choice. This has something to do with the overall balance among the 3 civs and the number of multi-civ cards. Without KP, there would be too many water cards and too few fire cards. Also, without Bronze-arm Tribe or Windaxe that may help you charge a multi civ card, I don't think this deck can afford having more multi-civ cards. Whether the other multi-civ cards (i.e. Gigappi and Galek) are necessary in this deck will be explained later.

Q: Why not play more 2 drops apart from KP and Emeral? Or Split 9 2-drops into 3/3/3 like you once did?
A: It can become a problem (not commonly encountered though) when you reach turn 5 or turn 6. If you play 3 different 2-drops such that their civs together comprises of all the 3 civs, you would have a hard time in thinking which mana you should tap as you play draw cards like hulcus in turn 5 and lucky ball in turn 6.

To make it simple to understand, suppose you only play Kooc Pollon and Melnia as the 2-drops: 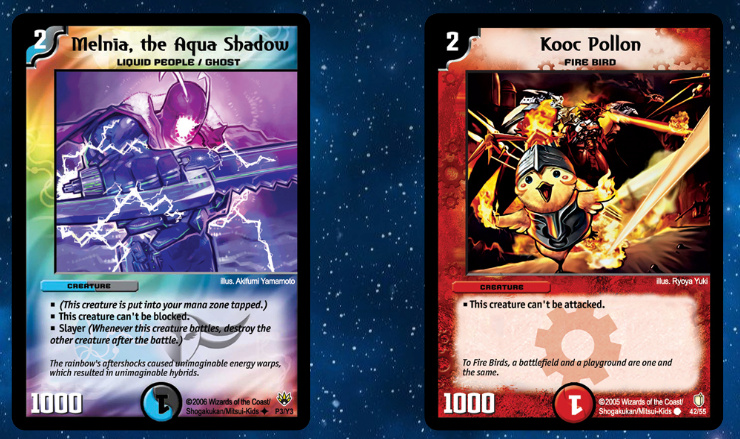 On turn 6, suppose you don't have KP or Melnia in hand, and you summon lucky ball. With the 2 remaining mana left, you probably hope that you draw either KP or Melnia and then summon it. But should you leave 1 water and 1 darkness mana untapped for Melnia, or 1 fire mana and 1 any other civ mana untapped for Kooc Pollon? Because you don't know what you will draw, you would have to weigh whether it's more likely to draw Kooc Pollon or Melnia. Very often, the chance is equal. You could have wasted two mana if you make a wrong guess. For me, this problem was not often encountered back when I play 3 different kinds of 2 drops , because I often didn't draw any of them... but I do need some time to do the guess work. Playing only Kooc Pollon and Emeral in this deck can solve this problem.

3 drops
Pyrofighter and Hulcus:
Everybody knows they are great. One additional point is that pyrofighter is very needed to make a turn 4 Lucky Ball possible.

Q: Why Gigappi Ponto?
A: For two reasons. First, I need it to balance the civs - it's good that it is both fire and darkness. Second, it's a strong creature that can go over common blockers like Belix/Sarius, and can't be attacked by common creatures with 2k-3k power, and can dodge spells like searing wave. Basically, think of it as Gonta.

Several possible alternatives are shown below:

Hourglass Mutant would be particularly great in this deck since most of my weak creatures are fire and water civ, and it's good combo with Gigarayze too. I haven't tried it to be honest. Maybe it's a better card. But I'd be worried about mass removal cards if so many of my creatures are below 3k/2k.

4 drops
Lucky Ball - pretty standard to include it in 3 civs aggro decks.

Gigarazye - not sure if you notice, all creatures can be retrieved from the graveyard with Gigarazye's effect, except himself and Arque. This is not deliberate, but can certainly increases the chance of getting something from the graveyard. Good against discard card. Sometimes you can also get back the creature (originally a shield) put into the graveyard as a result of Searing Wave. Maybe it'd be too much to play 3 copies though, depending on what decks you are playing against.

If you play enough chimera in this deck (for example by adding Gigabalza), you might consider playing Gigazabal - your only way out against Ailzonius if you don't play Melnia. But it's difficult to evolve into it within the same turn, and Paladin is actually a better choice in my opinion since all your creatures become unblockabe in a way (by removing opposing blockers).

5 drops
Galek - good blocker removal, and it can create a net gain of +2 board presence (you kill one creature and play one creature at the same time); by turn 5, your opponent (if not playing control decks) probably doesn't have much cards left in his/her hand - a nice time to discard

Ice Vapor - make your deck a bit control-ish
Corile - can play it if you want to provoke your opponent and make it less "fun"
Teleportation - a "1 for 2" card, meaning 1 card doing the job that normally takes 2 cards; can be useful sometimes

6 drops
Terror Pit - I have thought about whether the Pits should be changed to Loco. But in the end, I've decided I want some spells that might help me kill big creatures in case the game becomes long. I don't know which is better to be honest.

Surfer - probably the best shield trigger creature to have in aggro, along with loco/gigabalza/kolon

Arque
If you play Aggro, probably best to play at least 1 Arque as a hand guard. I originally played 2, but I made some changes to the decks, such that now there's no place for 2.

This deck probably still needs a lot of refinement, as I constantly edited it. So feel free to suggest changes. Have fun

- in the text box in the first image, the number of darkness and fire cards include galek and ponto, not just galek

Forgot to mention the "Weaknesses" part:
- a bit low on shield triggers
- most creatures die to mass removal spells
- might struggle with FWN/WDN aggro decks in which the 2 drops are stronger in power
- removal cards come late in turn 5/6
madmicro0430

An updated thought: I guess ultimately it would be better to cut the gigappi ponto and play hourglass mutant instead if most aggro creatures are weak creatures (e.g. 1k-2k power) and are of the fire/water civ, unless the emeral is changed to something else (like melnia or spinning terror).
Halfar

in my opinion 8 T2 Drops are not enough! There will be a lot games where u wont see a T2 Drop.

My GF has a RUB Aggro too, and i highly recommend Snake Attack and maxing out Pyrofighter + Lucky Ball

Unicorn Fish is a decent card too.
madmicro0430

@Halfar wrote:in my opinion 8 T2 Drops are not enough! There will be a lot games where u wont see a T2 Drop.

My GF has a RUB Aggro too, and i highly recommend Snake Attack and maxing out Pyrofighter + Lucky Ball

Unicorn Fish is a decent card too.

Thanks for the feedback

Appreciate it.
Actually ongoing changes have been made with this deck, not just the update mentioned above. Probably will show it while discussing more in depth your recommendation some other day.
Sponsored content