» Looking for NM singles (junk + foils)
by divergence Yesterday at 11:48

After presenting the RUB Base Set Aggro Deck earlier on, I'd like to introduce another non-competitive deck that can sometimes be extremely annoying, the mono water deck.

Embarrassingly, this deck is probably no different from other mono water decks out there.

For example, it relies on liquid people, the best race in the water civ. It also uses a lot of cards that bounce creatures. But perhaps some of the cards that are not often included in mono water decks can be discussed here, as you will see below.

So, let's jump right into it. 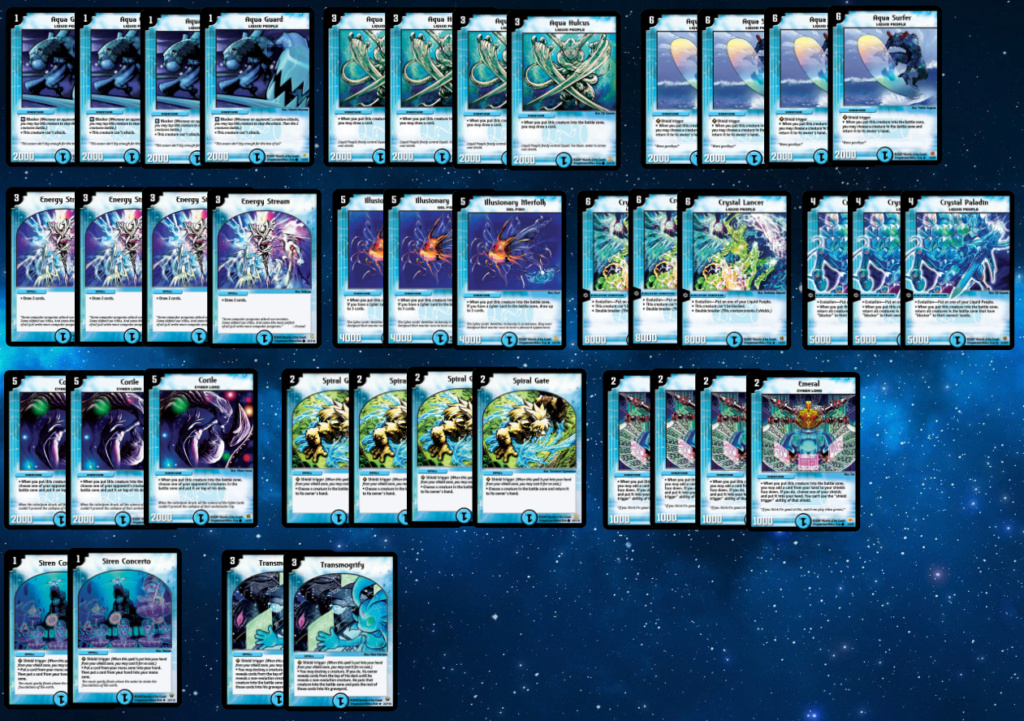 I'm sure most of the cards are already quite well-known to you guys, except maybe the siren concerto.

The game plan is to build sufficient board presence, and then attack all at once (at least break 3-4 shields in one turn).

Race:
- Obviously, this is a liquid people deck, and the choices of evo bait are pretty standard.

- Crystal Spinslicer is not included, because having more evo creatures would be too much in this deck, and if I want to play a creature without gaining an additional body on the field, I would rather evolve into sth that can cause mass removal (crystal paladin) or great destruction (crystal lancer).

- I find it well-balanced to have 3 lancer and 3 paladin (i.e. 3/3) instead of having (4/2) or (2/4). 3 paladin is probably necessary to ensure that you can draw it and go for game in face of many blockers your opponent may have. If you find it annoying to draw paladin in the early game and charge it as mana, eventually you can retrieve it with siren concerto and play paladin in the same turn, so there's is no big harm in playing 3 paladin.

- Some may suggest cutting some (if not all) aqua guards to make room for aqua vehicle, but aqua vehicle is not a good option in my opinion, because:

Reason 1: it does not have any effect, and with 1k power it dies to everything if you attack with it.
Reason 2: the winning strategies of this deck is by building sufficient board presence and then attack at once (i.e. NOT aggro). I therefore don't find the need to have a 2 drop with no ability in the early game.
Reason 3: you can see this deck does not have any 4 drops except crystal paladin, which obviously wouldn't be played in the 4th turn. So having 1 drops is beneficial in that in the 4th turn instead of underutilizing your mana, you can make use of the remaining 1 mana to summon aqua guard and the other 3 mana to summon an aqua hulcus or energy stream. Especially when you play energy stream in the 3rd turn, there is a certain probability that you will have an aqua guard in hand, and can summon it in the 4th turn with another 3 drop.
Reason 4: some may argue that aqua guard can't attack your opponent. But I eventually have to find a bait to evolve my liquid people, and under this circumstance, whether aqua guard can attack or not seems irrelevant, because as said in reason 2, I tend to attack all at once, and usually do so during the turn I evolve creatures. If you use aqua vehicle, obviously aqua vehicle would be the bait. But if I am not going to attack beforehand, I'd rather choose a cheaper creature in terms of mana cost and can block some of the small creatures attack in the early game, over aqua vehicle.

Draw power:
- Hulcus & Stream - indisputably the no.1 draw card in the water civ, so no further supplement on that

- I myself find it necessary to play 3 illusionary merfolk because of cranium clamp and lost soul - when I don't have any cards in hand, the only thing that can bring me out of misery is a top deck draw card, ideally would be the merfolk; while some may argue that whether there is sufficient cyber lord in this deck to support 3 merfolk, I notice many players would actually choose to target my liquid people rather than cyber lord when they destroy creatures, so my cyber lord often survive quite long, but it's just personal experience.

Reason 1: when you play it in the 4th turn, you can summon lancer in the next turn
Reason 2: this deck does not have any 4 drops worth playing in the 4th turn

To counter reason 1, I often don't see much advantage in having lancer a turn earlier when you have used the 4th turn to play a spell without gaining an additional body, and summoning lancer in the next turn, which again does not gain you an additional body! If lancer hits a removal card like terror pit, surfer as shield trigger, then probably you won't have much creatures left on your field. Even if you didn't hit a shield trigger, a corile, terror pit, surfer can already remove the lancer easily, again leaving you with limited board presence. Your remaining creature(s) in the field will all be weak and once it's tapped after attacking, it will all be attacked and destroyed by opposing creatures. to

Reason 2 is actually quite valid. But if I have to choose between keeping all 4 energy stream, vs adding some eureka charger and cutting some energy stream, I would still choose the former, because first of all i can summon a 1 drop and a 3 drop in the 4th turn (minor reason). Secondly (major reason), by drawing 1 card more with energy stream in the 4th turn instead of eureka charger, I can increase the chance of drawing cards that can help remove opposing creatures in the 5th turn. If you look at the deck, only spiral gate or corile can be played in turn 5 as a removal card. If you draw it a turn later, sometimes it can be too late. Of coz, you can argue you can play surfer a turn earlier if you play eureka charger. But surfer usually will be put into your shield by emeral if you have it already, and corile's effect is much more promising than surfer, so I'd like to have 1 extra card just to give me more options in turn 5.

Special cards:
Transmogrify
- It's not uncommon to see transmogrify in a mono water deck playing King Tsunami, but it's not included in this deck.
- In fact, the purpose of transmogrify (with only 2 copies in this deck) is to destroy something that you can't really bounce back to your opponent, frequently because of their come into play effect, or because it's a pyrofighter magnus or bazagazeal dragon which can come back next turn as a speed attacker (of coz, they can only be destroyed when transmogrify is a shield trigger).
- Because of its limited use, I think 2 copies are enough. 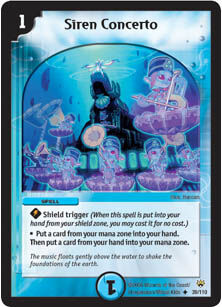 - With my limited experience, so far I didn't see anybody in OCTGN playing it. It’s quite a handy card if you want to retrieve a card from your mana zone and play the retrieved card within the same turn, without compromising your mana.
- It’s only a one cost spell. You tap the card that you want to retrieve from the mana zone, and then place a card from your hand to the mana zone. That way, you can play your lancer or paladin that you have put into the mana zone in the early game without losing one mana, and can even play it within the same turn!
- I didn’t opt for the usual Thrash Crawler, because although it’s a good blocker, you usually will not have enough remaining mana left to play something that has an active effect, like playing draw cards or powerful attackers on the field, which gives you a more active position. I also don’t think I need a strong blocker to hold off my opponent if I can retrieve lancer or paladin, summon it, and counter-attack creatures with it. Thrash Crawler probably works better in a heavier control deck, but not in this midrange deck.
- Although one drawback is that you need to have an extra card in hand for you to put into the mana zone, in this deck where there is a lot of draw cards, it's likely that you will have another spare card.
- Because of its limited use, I think 2 copies are enough.

Other cards that I think can potentially be included (and more importantly fun!):
Unicorn fish: it’s a 4 drop that might fill the space for 4 drop creatures, and can bounce creature, but I think it has better utility in aggro decks 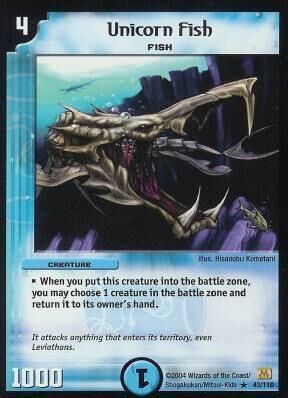 Pokolul: a card that is never played perhaps, because of its restricting ability and no come into play effect, but again it’s a 4 drop, and it’s cyber lord therefore good support for illusionary merfolk (particularly because corile and merfolk both cost 5 mana, so you have to play corile first on turn 5 and play merfolk only on turn 6 if you don't have emeral on the field, which isn't ideal), and if you are in luck, you can attack one more shield because of it 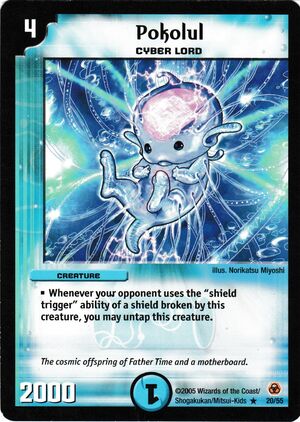 Other cards that I DON'T think can make the cut:
Angler cluster: no come into play effects and can’t attack opponent when you have board presence, just a big blocker sitting there for ages; there are a lot of removal cards in this deck already to get rid of opposing creatures 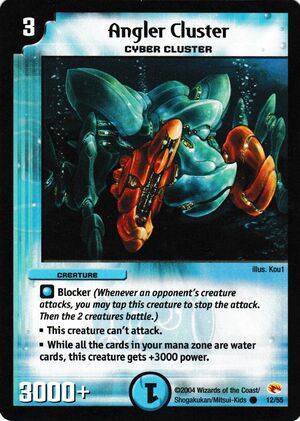 Crystal memory: with so many draw cards and retrieval cards, you can have what you need readily 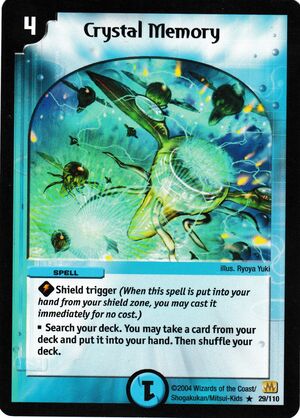 Brain serum: the amount of draw cards in this deck I think it’s sufficient and they are generally superior to brain serum; there are already enough shield triggers in this deck as well 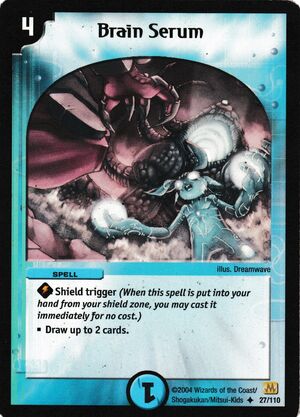 Weaknesses:
- it's a mono-civ deck, therefore not a large variety of deck strategies; often lose to control decks which have a wider variety of strategies
- most creatures die to mass removal spells, like searing wave
- (maybe a bit situational) difficult to compete with decks that have power raise, e.g. petrova (but with paladin, it can remove strong blockers seen in hydro hurricane or marino control deck, yet still not promising to compete with those decks)


It's a long discussion (on such a non-viable deck). Thank you for reading. Feel free to share your thoughts below