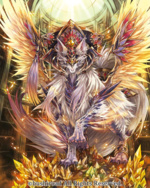 Back in the days of Duel Master's glory, I was constantly playing Heaven's Gate deck. Other archetypes simply didn't matter for me, HG was just too much interesting. I was constatly tweaking it (like adding Senju, Seeker of Thunder). However, the more time past, the worse the deck became. Then, DM died in my country, and so did my possibility of building some good HG.
About year ago, I stumbled upon Emeralda, Pitch Dragon Elemental. I instantly knew that I should build a Heaven's Gate deck using this card. I had a moment of inspiration - instead of just randomly adding this card to HG, I build a shield based deck with this card as a core. The deck was build a year ago, and there is a possibilty that there are better cards for this deck than those used here. Also, I'm absolutely possitive that people in Japan built these kinds of decks long ago, and this isn't as orginal idea as I would like it to be. Still, the deck is increadibly fun to play. Here is the decklist:

The game plan is to either use Memories of the Planetary Dragon with Emeralda or to switch one of your shields so that either your opponent will eventualy break it or to use it with Emeralda. It triggers a chain of blockers and spells that is increadibly hard to defend against. The good thing about this deck is, there are really small chances of getting something bad from your shields when using Memories + Emeralda combo. There are many cards like Truename Tiger or Heaven's Gate Elemental that will trigger the combo the same way Heaven's Gate would. Additionaly, if you use Memories, your opponent will either stop attacking you or he/she will risk that you'll get something really good from your shield.

When it comes to draw, there are essentialy two cards for it, but their functionality differs. Aquan Jr.'s Deliver is for early game hand acceleration. Lord Reis is here for propelling your hand while you use the combo. If you're to put many blockers into the battle zone using effects of Tiger or Heven's Gate, you draw cards while putting cards on your Battle Zone. It gives you access to new possibilities.
Acroite is here because your goal while playing this deck is to start your combo as early as possible.
Tigunus is here to counter ubiquitous discard.
I absolutely love an addition of 2 Alpharion's here. It works as a finisher, and if you performed your combo as planned, he is costless.

Wonderfall allows you to absolutely spam the Battle Zone with blockers. I found that Senju is not so important here - in most of cases, you just have enough cards on the Battle Zone to destroy your opponent.

Of course, I'm open to suggestions and changes

Oh, I did not know that. Okay, time to slightly adjust the deck. Thanks

Interesting, I like how you combine Emeralda with the Memories. I thought about utilising Emeralda with Lionel, Zenith of "Ore", but it's somewhat difficult and what you are doing is much easier.

I had totally forgotten all about Tiger Legend. In my opinion it's a bit too unreliable. I would also suggest adding Kernel here. These days, you want to maximize your shield triggers.

I can't really tell how well your Memories of the Planetary Dragon plans work but I could imagine it's relatively good. Maybe adding some Shield Plus cards there would make things more interesting. It's a shame Milzam will be banned at the end of this month. Like Yami said, no harm in preparing already.
Furryfox

Adding Shield Plus cards is a really good idea, I'll try to look for some. About Kernel, I'm not fully sure if it fits in this deck, but I'll try to experiment with it nevertheless.
Thanks : )
DarknessPony

I would suggest you give up the shield plus ideas for Emeralda since Ladio Yaesar is not as quick and efficient as Milzam. I'd suggest you focus on the basics which is SPAM, and stuff like Kaiserhalla or Heaven's Rosia can do. Miracle Miradante would also be another good option since it's a nice surprise defense.
Mr-ex777

DarknessPony wrote:I would suggest you give up the shield plus ideas for Emeralda since Ladio Yaesar is not as quick and efficient as Milzam. I'd suggest you focus on the basics which is SPAM, and stuff like Kaiserhalla or Heaven's Rosia can do. Miracle Miradante would also be another good option since it's a nice surprise defense.

Actually you can use Five Star, too bad it's not a blocker.
Furryfox

Yeah, nothing is as good as milzam. I was thinking more about something small, like Hyou, the Oracle. It would be there instead of Acroite, but I honestly don't know if that is a good idea. About the cards that Pony recomended me, I really think that the only card that would fit here would be Kaiserhalla, War Dragon Elemental. And I don't even know how to fit it here. I tried dragonhearts, but they were simply too slow for this deck.
Sponsored content