Description
A two strands aggro deck featuring Gajirabute and Swap as the first strand. The second strand is the variation and the options to play an evo creature. Eight two-drops to apply early pressure, Hulcus and Stream for the draw, Terahorn as an additional search option with a body, BAT to ramp Mana and Pincer Scarab to get an advantage of the early shield brake to boost him over 6k and break even more shields. The four different evos make it very difficult for the opp, because he has to think twice which bait he’s going to kill and prevent the big finishers. And yeah, Corile, Surfer and Pit for the obviously removal.

Thoughts
This deck went through many thoughts, changes and modifications. Innocent Hunter would fit perfectly in this deck because of FDF, Lancer, Ultra Mantis and Evil Incarnate, but the original baits are way stronger and a lot easier to play.
I replaced a Paladin for a Cryptic Totem because of the option to get Cryptic out of the Mana zone in the opposing turn and swing for game or many shields with my own field in my turn.
I prefer four Hulcus and two Streams instead of a 3/3-split because I need the body in the field and the draw isn’t the most important thing in this aggro version. 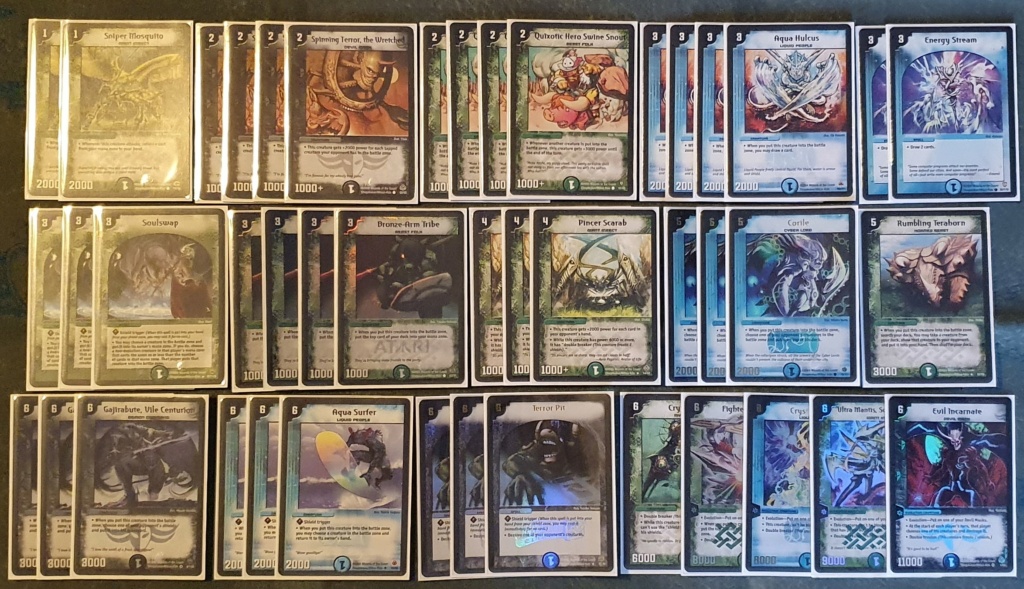 First of all you describe in your thoughts that you play Ultra Mantis though I don't see this card in your list (but in your picture).

I think that Ultra Mantis and Evil Mask are not worth the spot because of only 5x (Giant Insects) and 4x (Devil Mask) baits. By the time you get to play those cards your baits either have (nearly) won you the game, got answered by the opponent or you simply don't draw evo and bait together.

Additionally I would cut the Mosquito completely. You don't necessarily need a 1 drop (and with only 2 copies and 44 cards there is only a 20% chance that you have them in your opening hand anyway) and if you want the effect of Mosquito I would go for Splash Zebrafish.

As you described our German meta is full of discard so I suggest that you add 1 copy of Arque.

There is also a debate whether you want to play Paladin or Lancer as your liquid evo. There is no right or wrong and comes to personal preference (I personally like Paladin more because it can single-handedly win you games against a heavy blocker line up which you find in Initiate-Marino, Hydro Hurricane and other decks).

Lastly I would add a bit more darkness cards so that you can play your Spinning Terror on T2 reliably. Maybe another 2 drop like Propeller Mutant or Melnia (which I prefer because it's also a Liquid people) or something like a Locomotiver.

I hope my point of view can help you for further modifications on your deck.

Yeah, Ultra Mantis is / was in this deck, but I already cut it bc I needed her in a similar Giant Insect deck

The most important point of this deck are

those different evo strands bc if there are different baits on the field it's very difficult for my opp to get rid of the right one bc I have different options to play some bigger evos on them. This deck is very fast and aggressive for this civ combination so the evos aren't that necessary and in - let's say 90 % of all games - I didn't really need the evos.

An important point of this deck, which I really like, are those different evos. Otherwise and if I would cut the Giant Inscets and the Death Masks it would just be a normal Beast Folk / Liquid People aggro with some darkness in it... not that inspiring imo and very common

I don't play Mosquito as a turn 1 drop and obisiously not to attack in turn 2 - so I don't care about it's effect. It's just a cheaper option as a bait for Ultra Mantis. But yeah, I already cut both Mosquitos for two Propeller to increase the darkness count, thanks for this suggestion my friend

Melnia is definitely a good alternative as a 2 drop but the disadvantage is clearly visible: multi civ. Bc of BAT I don't want to be mana screwed and I try to have as little as possible multi civs in this deck. Once I played 1x Plaque but I cut it too bc of the same point.
Loco is a good option in this deck, but I don't really care about my opp hand (especially bc of Pincer) and I guess two Locos are a bit unnecessary just for the discard. Two more 2 drops like Propeller definitely make a better job and I'm very happy with the trigger count (3x Swap, Pit and Surfer).

In the previous version (as seen in the match on our YT channel) I played both Paladin and Lancer and was very happy with it. I cut the Paladin for some test matches for a Cryptic (obisiously bc of Swap and to swing with my field for game), but it didn't work that good so I already switched back to 1x Paladin and 1x Lancer.

Thanks for your suggestions, really appreciate that!

Forgot to mention in my previous post:
A already added 2x Emeral to set early shields for late game defense and too increase the 2 drop count even more.
loui-mh

In the updated version I totally cut both Ultra Mantis and Mosquitos and the third Corile for four more two drops. Two more Propeller Mutants to increase the darkness count and two Emeral to set shields in the early game. So all in one I have now twelve two drops and eight three drops, which is a quite good curve imo.

The Cryptic Totem I already cut again for a Paladin to have a early answer against heavy blocker based decks like Gauardian / Hydro decks. It's a pity tbh bc I liked the idea to charge Cryptic in the early turns into mana and swap it out with an already set shield (with Emeral) in my opp's turn to swing for game. But yeah, Paladin is a way better and faster option. 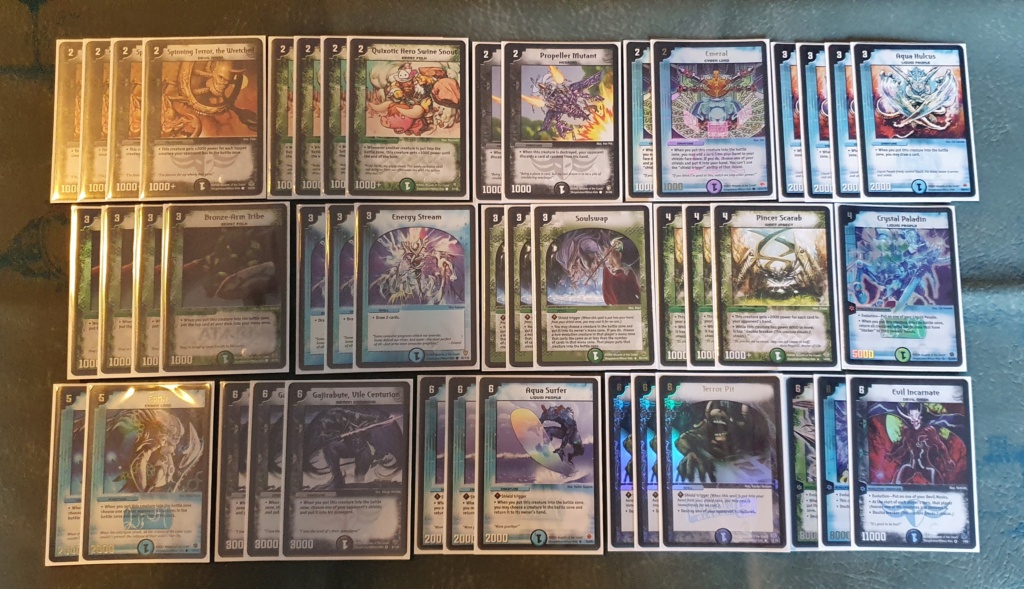 cool Deck Loui, i like the amount of different evolution creatures, tho the main idea is pretty cheesy, swapping gajira back and forth

In the updated version I totally cut both Ultra Mantis and Mosquitos and the third Corile for four more two drops. Two more Propeller Mutants to increase the darkness count and two Emeral to set shields in the early game. So all in one I have now twelve two drops and eight three drops, which is a quite good curve imo.

The Cryptic Totem I already cut again for a Paladin to have a early answer against heavy blocker based decks like Gauardian / Hydro decks. It's a pity tbh bc I liked the idea to charge Cryptic in the early turns into mana and swap it out with an already set shield (with Emeral) in my opp's turn to swing for game. But yeah, Paladin is a way better and faster option.

I would say this list is a bit better than the old one,
because of more T2 consistency.
Cutting Corile is the right call.
loui-mh

I would say this list is a bit better than the old one,
because of more T2 consistency.
Cutting Corile is the right call.

After a few matches I kicked out both Propeller Mutants for two Melnias to increase my darnkess count and have more baits on the field for Paladin and Lancer. Now I have twelve 2 drops which is kinda nice and very fast!

To get more consistency I replaced both Emeral for two more Melnia, so now playing four of each Spinning Terror, Quixotic and Melnia.

I also kicked out the Streams for two Lucky Balls to get another body on the field and to increase the body count in total.

After some tests facing early discard and removal like Volcano Charger I missed a bit of grave receycle, so I included two Gigarayze to get those weenies like Melnia and Hulcus back from the grave.

To be more independent from the baits I reduced the evo count to only one Paladin and one Fighter (still commute between Fighter and Lancer but Fighter fits more in it atm bc of the civ curve - but I tend more to play Lancer since it is unblockable).

Thinking of reducing the deck size I could cut one from each of the 2-drops, downsizing the deck to 41 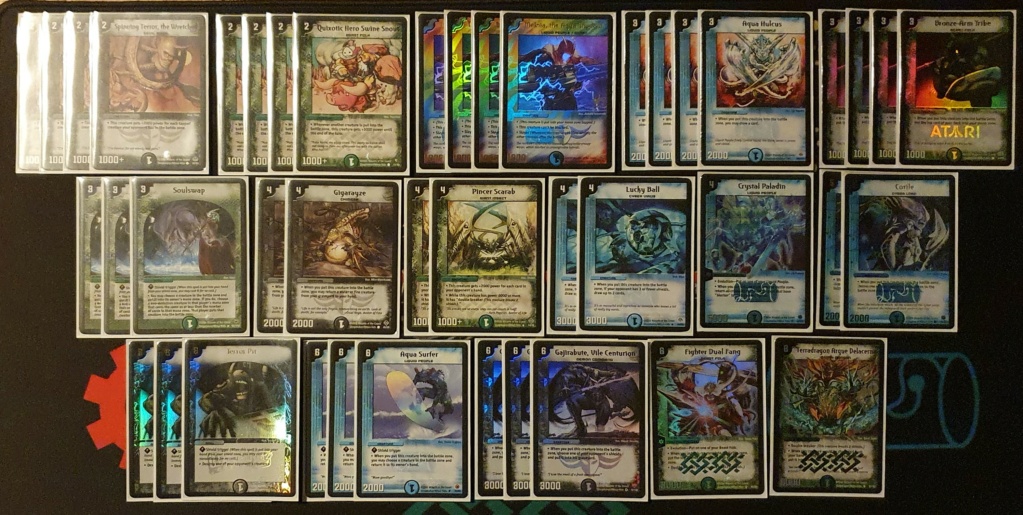 Working and working on this deck, now again with a few changes. I got rid of two 2-drops and added two Terhorns to either search for a Delacerna (against discard or control) or for a Gajirabute to play it in the next turn after Terahorn.
To play a second Delacerna I got rid of the useless Fighter since it's very situational.
Since I played 43 cards before I removed once Pincer Scarab and one Gajirabute to cut the deck sice down to 41 cards.

I'm going to test it a bit more if the switch to a second Delacerna is useful, otherwise I will go back to a third Gajirabute since I need the darkness mana in the first two turns more than the Handguard. 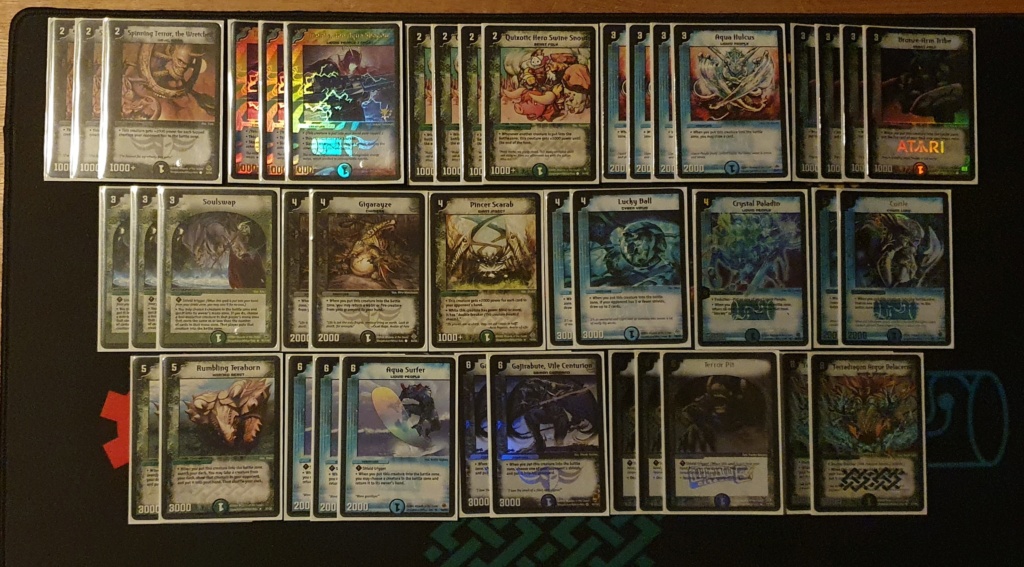 If you want to see the first version of this deck - including all those evos I played - in action, check out our YT channel for the latest content or just watch here