» Is there a place for Slash Charger in RUB Control?
by Halfar Yesterday at 11:03

Miraculous Meltdown - THE most underrated card you never saw coming

Miraculous Meltdown - THE most underrated card you never saw coming 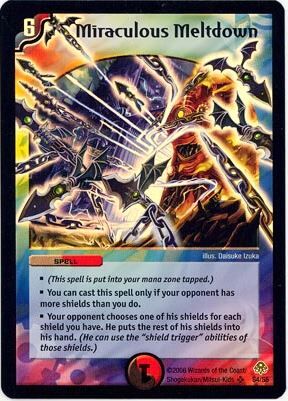 Just had to make a post about this card now, as i have recently been playing a lot of DM again.

I have been using this card in my RUB and Phal control decks, and to the greatest success you can imagine (especially in RUB). My final RUB deckbuild is one of the best and most versatile TCG deck i have seen, with absolutely no bad matchups right now. It usually wins pretty convincingly against Phal Control, Marino control, Rush, Aggro variants and even Starnoid quite a few times. Once in a while you do end up in a losing position though, and man oh man has this card been effective in these situations.

You can be in the worst spot imaginable, with 0-1 shield left, and your opponent with 5+ shields remaining. A situation where pretty much any deck would lose (assuming you dont have field advantage), and just have no chance of coming back. Then you drop Meltdown, and boom you just won, out of the blue. It is a complete gamechanger, and i have no idea why we never saw this card in play back when the game was active. Although not as versatile and splashable as Holy Awe, it surpasses Holy Awe when it comes to its gamechanging capabilities.

After a few successful uses, your opponent will see Meltdown coming, and will try to play around it. The problem for your opponent in doing so, is that it means keeping your shields alive, and waiting to attack the final ones until they have a clear shot at killing you. It can be done yes, but this means that Meltdown also has an impact on the game, even by just your opponent knowing that you have it. Holding back against RUB control is very dangerous, and will be punished alot. There is no easy way to explain this properly, but this card is completely unique, and i have really not realized how dangerous and actually kind of OP this card really is.

I have had 2 copies of it in my RUB control deck for a while now, but its just now recently that i have actually focused my games around it more. Its an extremely deadly card, that basicly means that there are no true bad positions for you in a duel, as long as you have creature(s) on the field. If you have never tried this card out before, i highly recommend you doing so. I will make a new top 10 DM card list soon, as some of my opinions have changed lately, and Meltdown will probably be on this list. Its a situational card yes, but so is Soulswap as an example, and look how good Soulswap still is. The game is actually about breaking your opponents shields, and this card does just that, potentially with zero effort.

Just thought i would point this out
AleksVin

It has definitely become my favorite card in my RUB deck. I won so many games thanks to it, that I wouldve otherwise lost.
LordSommerhill

@AleksVin yeah it is a great card, and very hard for the opponent to safely play around.
Halfar

Some people really underestimated this card.
Meltdown can completely change the way your opponent plays.

And it steals games that would lost otherwise.
Sponsored content