Listed are 3 of my favourite decks thus far, all being Aggro decks with some similarity in the creature and race buildup. I'm from Singapore and thus, my decks will not adhere to the standard DMR TCG banlist as the only card prohibited in our local tournaments is Bombazar. Cranium Clamp isn't limited and hence the prevalence of splashing Terradragon Arques in our meta.


I've kept the deck sizes at 40 for consistency sake.

**Click on "Enlarge this image" to get the full view of the deck. 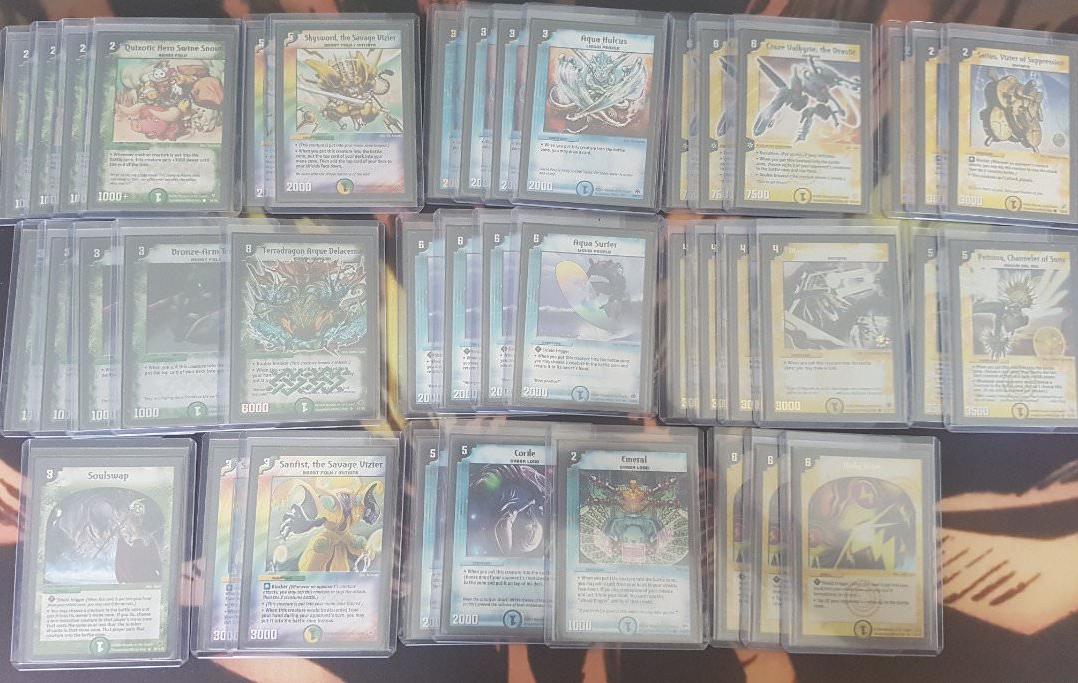 Board presence with Quixotic and Bronze-Arm, into turn 5 Petrova buffing beastfolks can exert a lot of pressure on the enemy as it would put them out of range of searing wave/blizzard of spears. Petrova is a great finisher as well, being untargetable. Race balance is great as well, initiates/beastfolks. Able to control board/gain tempo with Craze Valkyrie/Skysword against most aggressive/rush decks. Standard Bombazar Blue without Bombazar. 4 swaps are a must, Jagalzor to threaten lethal in turn 5/revenge kill enemy creatures and gain board tempo in aggro matchups. Gain huge mana advantage and board presence with dual fang and guarantee win by playing/swapping Gajirabute. 1x Paladin to finish/clear enemy blockers. And 2x Corile because... it's Corile

Let me know your thoughts on my decks, I would like to hear some suggestions for them!

Especially the one with Gajirabute looks awesome.

Have you tried 3-4 Petrovas in the first deck?
I've tried an similiar deck and i were running Taj and Lancer
NaniMan

Especially the one with Gajirabute looks awesome.

Have you tried 3-4 Petrovas in the first deck?
I've tried an similiar deck and i were running Taj and Lancer

I've tried running 3 Petrovas in the first deck but I found it too be one too many. 2 seems to be the most comfortable for me

Ahh okay... what kind of blocker removals are played in your meta?

Halfar wrote:Because in my local meta nobody plays any blocker removal (except Paladin)

Halfar wrote:Because in my local meta nobody plays any blocker removal (except Paladin)