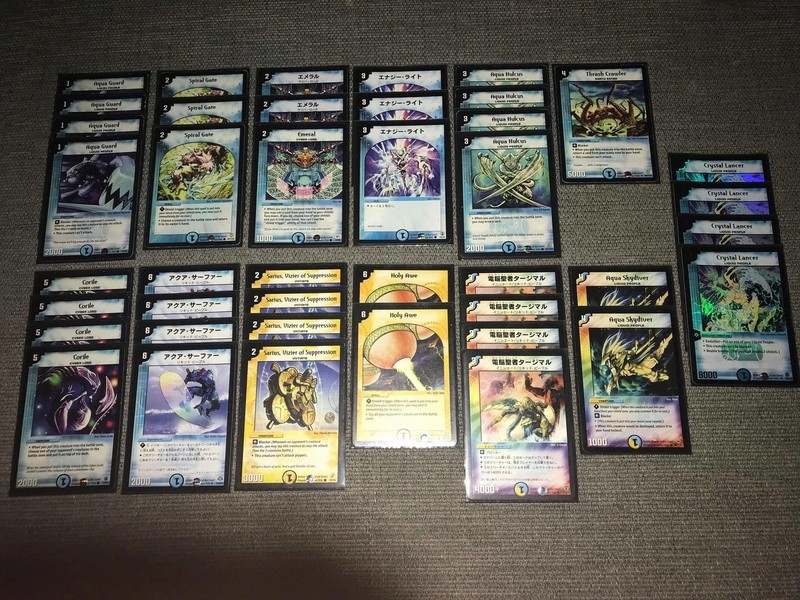 This is a deck i made years ago, and was originally made as a mono water deck, with Angler Clusters instead of Tajimal, Madrillion Fish instead of Sarius etc. The deck as it is today, is very very good. It is a very straight forward deck, that has strengths in all areas. It is both fast, plays a strong lategame, has a lot of draw power, has a lot of defense, a great finisher and lots of removal. The reason i changed the deck from mono water to light/water, was to adapt to a meta with a lot of Bombazar and control decks. As opposed to Angler Cluster, Tajimal does really relly well against Bombazar, Bolmeteus, Twin Cannon etc, while Sarius does better than Madrillion Fish/Battery Cluster against early aggro/rush cards. The Holy Awes are also great against aggro and Bombazar decks. After adding the light engine, the deck litterally has no bad matchups. It wins against control decks most of the time, and even wins against Bombazar Blue around 30% of the time. Against Bombazar, this decks gameplan is very straight forward:
You play an Emeral or a Hulcus early on, and proceed to hit a shield every turn, as you build up your wall by spamming Tajimals, Sarius, Aqua Guard etc. When you get your opponent down to 2 shields, you should have reached about 6 mana, and can then proceed to drop the Lancer, and finish the game. This works surprisingly often, and it works against controls also. The deck is very straight forward, yet very fun to play. It uses the standard water line up, carrying one of the best finishers in the game, as well as water great early game lineup.

Yes im not using Illusionary Merfolk in this deck. The card is too low-impact for a 5th turn card in an aggresive meta like mine. I also don't like the fact that it costs the same as Corile. In this deck i prefer to drop Corile on 5, and Lancer on 6.

You can also try out the initiate version of this deck. You could then swap Hulcus for Magris, and swap the Lancers for Craze Valkyrie. That version will also be very good, but i prefer the Liquid People version!

I know people don't like thinking about Bombazar when building their decks, but i think it is really cool that i have found a deck that flat out beats many Bombazar variants, and can even do quite well against the standard Bombazar Blue (winning about 1/3 times). This deck has one of the best matchups against those overpowered decks that i have ever seen. When you execute the gameplan that i described above, you put a lot of pressure on the Bombazar decks. When they know you can drop Lancer on the next turn and win, they are pushed to go for the kill in a not so comfortable position. You may have 3-5 shields remaining, which can be full of Surfers, Awes, Skydivers etc. The fact that Lancer can be put on Tajimal as well, means you can play defensively, while being offensive at the same time. What i also like so much about this deck, is how simple it is, and yet so good. Let me know what you guys think!

Look pretty standard but solid!
Is your meta full of blockers and requires a lot?
In mine are only up to 4 if played.
nitrox

I don't know why, but seeing that pic gave me a wave of nostalgia. Used to have a deck like this. Couldn't see the Lancer it first, the pic's getting cut off on the right because of the screensize...

Anyways. The only thing missing is Petrova! You have enough Initiates and Liquid People to make use of it, I think!
I'm not sure about keeping Corile in there if your plan is to attack shields early. Corile works best with the opponent having a low hand count, early attacks negate that. Unicorn fish would work easier, unless you plan to use Illusionary Merfolk(since you already have Emerals in there). Unicorn is better for early attacks too, you can pick off blockers that are stalling your early attack, or pick off early attackers like Gonta, Pincer Scarab, Hulcus etc.
LordSommerhill

@Bronze-Arm Sloth yeah i gotta play a little more blockers than i normally would, due to the amount of Bombazar and Rush/Aggro deck in my meta. If i dont, the tend to overwhelm my decks if they arent fast enough.

@nitrox i dont know about that bro :/ Corile is very good. It is a very nice card to drop the turn before i drop Lancer, to add an extra body on your field, as well as putting my opponent on hold. And Corile in general is such a good card. Spiral Gate is actually the card im not too sure about on this decklist. Sure its a trigger and the effect can be usefull etc. But i just dont feel like it really does anything when you play it outside of being a trigger. You bounce a creature, but not doing anything about your field, while the card you bounced can just come back out next turn, essentially making Spiral Gate a -1 if not played in a crucial situation. Petrova is an interesting thought though! Have you had success in a deck like this with Petrova before? It would certainly make the Bombazar matchup improved, if i could buff my Tajimals to 8000+, Sarius to 7000 and even Aqua Guards to 6000! How many do you suggest i test first? 2 Petrovas maybe?
nitrox

Yeah, two would be good. If it works, maybe up it to 3(but I don't think you'll need it). Do try Unicorn too if you have some lying around, I think it'll improve the deck immensely. Spiral Gate is mostly important because of its trigger value. The low-cost usability when you have enough mana comes later.

About Corile, yeah, it's a great card bordering on overpowered, but its effectiveness depends on the deck plan. If you find yourself in situations where the opponent has very low hand count, then sure, go ahead. But if your opponent has a huge hand, Corile's effectiveness is terribly reduced.

Pretty standard but good looking deck. But i have a feeling that this deck would be better if it concentrated on craze instead of lancer

@Halfar yeah Craze is always good, but Lancer really works wonders in this deck. I tend to break some shields early on, and can then proceed to finish with Lancers on turn 6-7. Lancer is such a great finisher, and is soooo easy to spam in decks like these. What to you think about running both though? The deck should have enough draw power to pull it off.
Halfar

LordSommerhill wrote:@Halfar yeah Craze is always good, but Lancer really works wonders in this deck. I tend to break some shields early on, and can then proceed to finish with Lancers on turn 6-7. Lancer is such a great finisher, and is soooo easy to spam in decks like these. What to you think about running both though? The deck should have enough draw power to pull it off.

@Halfar alrighty then, i will try it out!

LordSommerhill wrote:@Halfar alrighty then, i will try it out!

Do you have tested it and have results ?

@Halfar yes! I tried it with 2 Craze and 2 Lancers, and it worked out very nicely. However though, i did find that i lost some pressure against control decks lategame. Lancers being unblockable is just such a major threat later on in the games, and just forces your opponent to play more defensively than they would want to. Using both Lancer and Craze definitely works, but it kinda depends on your meta and your preferred playstyle. I may be wrong about this, but to me it feels like x4 Lancers just work better in this exact build. Lancers is more offensive, and Craze is a great control card, and they both do what they do really well.
Sponsored content