Is he even useful enough for using him or building a deck around him? 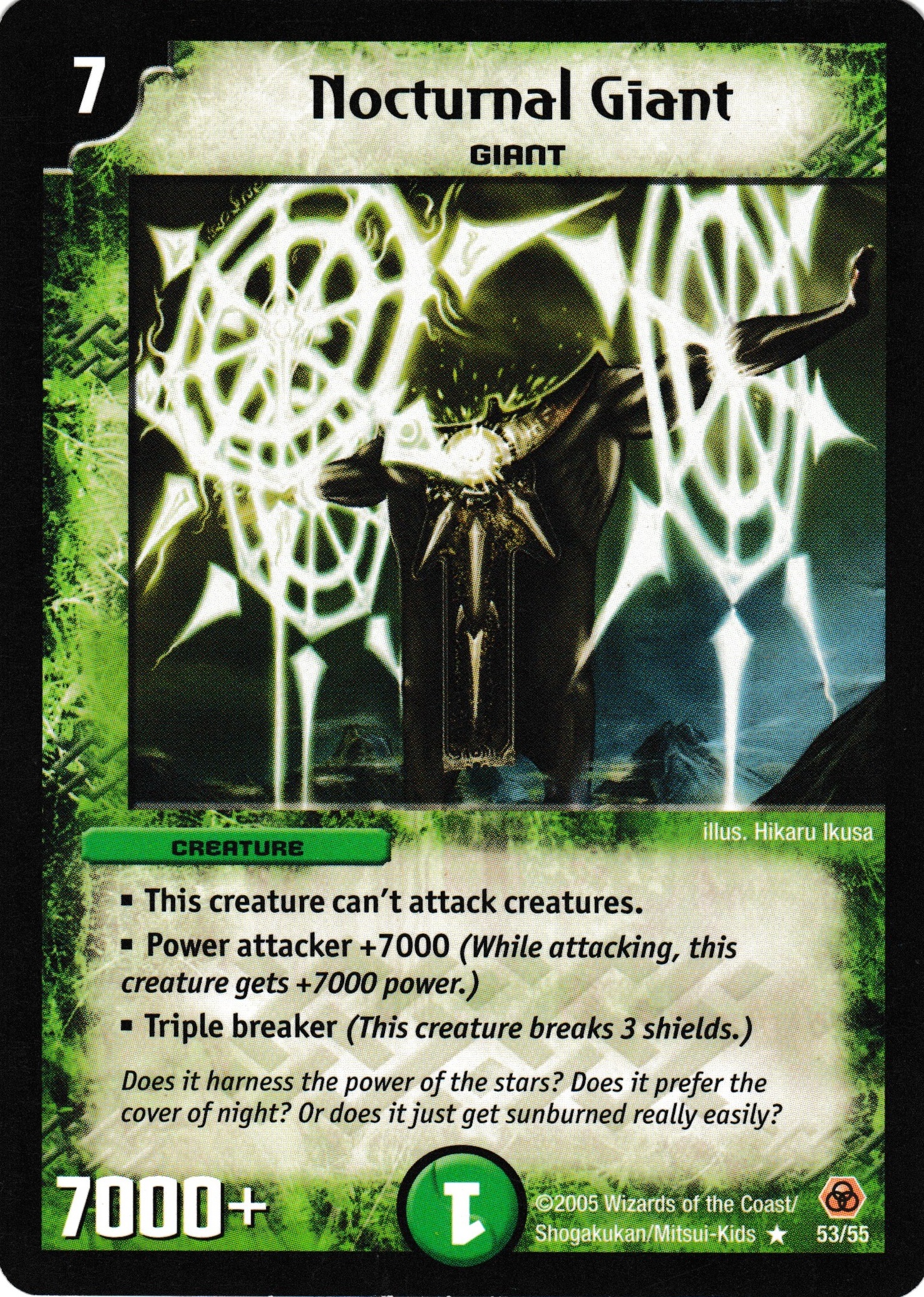 I have about 50-60 Promo Nocturnal Giants flying around, and i have never found any use for him, as well can't think of any idea.
Does anyone have an idea on how to build a deck around him, not just running him? TCG, no OCG please.

Waiting for your ideas!
Admin

Nocturnal Giant is a strange one. You have plenty of promo versions of it and I understand that you'd like to get some use for those cards.

I woudln't really worry about blockers, at least if their power would be less than 7000. The problem is, that light blockers could attack on Nocturnal Giant when it's tapped and then power attack would be no use. Then again, in this scenario, Nocturnal Giant would have gone through and broke 3 shields.

You'd want to protect your Nocturnal Giant from your oppontent's blockers and the best way to do that, would be having blockers yourself. Pala Olesis would power-up your creatures during opponents turn and Gran Gure could be summoned right before Nocturnal Giant. Petrova would be a great way to boost your Guardians so that even Messa Bahna would be very powerful.

In short, Nocturnal Giant could get some action in decks when it would be used with it's greatest weakness, big light blockers. And Guardians are full of those.
Bronze-Arm Sloth

But who is playing big blockers. In my meta no one even plays blockers. Sometimes a Squito finds its way into game, in rarer cases someone plays combo heavy stuff with Olesis or Jil Warka max.
Also it is even rarer, that someone attacks with a blocker, a pit would be more of a problem.

Also this advise does not help me building a deck around him :/
Admin

You would be the one using the blockers then. That's the most apparent way of benefiting of Nocturnal Giant in a deck. At least for me.

Maybe others have better ideas
LordSommerhill

Tough card to find use for. Not useless, but there are just better option. An example would be his brother Avalanche Giant, which i would say is better in every way, shape and form. Costs 1 less mana, has more base power, and the same effect. But on top of that, if he gets blocked he breaks a shield. Since giants don't have any direct support, i would never use Nocturnal Giant over Avalanche Giant, despite having more power when attacking. Since it can't attack creatures, the power attacker will only ever be relevant if Nocturnal Giant gets blocked by a massive blocker, and you dont really see those very often (pretty sure Valkyer Starstorm Elemental is the only one of relevance). So it is better to just have a higher base power. But crappy stuff aside, if we were to use Nocturnal Giant in a deck, just for the heck of it, i think i know how!

Not being able to attack creatures, Nocturnal Giant is there pretty much only to tear away at your opponents shields, and to remove their defensive lines with its massive attack. So i would build a heavily defensive deck, with a lot of blockers. This would protect you against rush and aggro, and would slow down the match so that you can get your mana going without dying. 7 Mana and no speed attacker makes Nocturnal Giant very slow, so Soulswap is absolutely needed, in order to get it out as fast and cheap as possible.
We are also gonna need another civilization to help us out with blockers. Obviously light comes to mind, as they have the best blockers, and with cards like Sanfist and Skysword. But i would rather look towards water, which can not only provide you with blockers, but also with draw power and removal. Being able to Soulswap Surfers and Coriles is also no joke. So the deck would have the gameplan of being defensive until reaching 5-6 mana, and will then start taking control of the match, and eventually summoning Nocturnal Giant as the finisher. Here is the decklist i came up with:

So there it is. Only 10 different cards, with 4 copies of each. Im pretty sure this deck would work just fine, atleast against non top tier decks. I guess depending on your meta, you could go more mid-range and remove the 4 Aqua Guards for a bigger blocker like Revolver Fish or Zeppelin Crawler, to be better suited against slower decks, though Aqua Guard is good bait for Soulswap. You could also tech in 1 of either Marine Scramble and/or Trash Crawler. Scramble works as a finisher against defensive decks, while Trash helps you make the deck more consistent, and also works great with Soulswap.
Admin

@LordSommerhill, your deck suggestion is actually rather good. I would try to also use light since, like you said, it has the best blockers. And then instead of Marine Scramble, one could simply use Holy Awe.

But if you want to use a finisher spell against decks with high defense, I would go for Invisible Tunnel instead of Marine Scramble, although I think neither of them is really useful.
Bronze-Arm Sloth

Thanks for your suggestion, actually build a version with light and water, and fewer blockers, because they aren't really needed at all. 4 are far enough for my meta

Btw i know how and why to play cards like thrash

Have you tested the deck yet? How does it work? And against what?
Bronze-Arm Sloth

Hey man!
Tried against:
Rush: lost, what else haha
RUB Control: a lucky 2:1
LDW Control: lost because of clamps and locos

The deck worked fine against random decks and fieldcontrol.
With random i mean more of sub decks that are rarely played, as well as themedecks
LordSommerhill

Sounds good. Yeah Rush is a pain in the butt in this game. You pretty much have to either have Bombazar + Soulswap, or swarm the board with blockers early on to beat Rush. I think that was about the only reason i suggested more blockers for the deck. Its just such a bummer when you think you have built a good deck with a lot of cool cards, and then you just get screwed by Rush. But i guess that is also because i have several rush and aggro decks in my meta, including a rush deck of my own that i test against new decks.
Bronze-Arm Sloth

Here's my list. I also won against Bombazar, but a version called Bombazar Black, not Blue, i swapped him away as well Awe did it's best.
Luckily the one decks with a lot of blocker hate are Rush decks and my Bombazar Deck haha, so i could use them for long turns to keep building my presence up