I dont think tcg mono civ is a thing

I dont think tcg mono civ is a thing

Tbh i have tried irl tcg monociv and TCO mono civ and they play out shit, Nature has no good finishers and/or defense, Light has very little good finishers, Water is bleak with no boosts or def eff except blockers, Fire is full of offense and has only cucco to rely on. The only potientail candidate may be dark but i have very little hope u can brng ballom out. On the other hand OCG has excellent Mono-civ potential with mono light and water being the most successful in my experiments
Yami_Michael

Mono-Water would probably be the best and easiest (just simple Liquid People beatdown). Also, no defense? It has Gate and Surfers.

And Nature has Dual Fang, who really isn't bad at all.

Sure, A TCG deck with more than one civ is has a better chance against a mono civ deck, because it can choose from a bigger variety of effects and react more flexible.

Mono water liquid people like Yami_Micheal said can be quite effective. Mono dark, can be good but has acceleration and often lack (exceot mongrel man) handcards. If your lucky Ballom can cause some damage, if your opponent has no darkness, but still it isn't gamechanging.
Beast Folk Rush is acceptable, but i can't remind many situation's were it was that successful.
LordSommerhill

You are almost right, but not quite. Mono Water when built correctly is absolutely good enough in TCG. Water is the best civ in TCG by far, and it is the only civ that has it all (all the important stuff anyways). It has the draw power with Hulcus and Stream, it has the blockers (Aqua Guard, Angler Cluster etc), it has the finisher it needs (Lancer), it has one of the best triggers in the game (Surfer), and it has Spiral Gate, and Emeral to get them down. And ofcourse it also has OP removal cards like Corile, Surfer again etc. It gets around discard with its draw power, it has enough blockers and removal to deal with rush, and it finishes off control decks really fast too, because of multiple Lancers. It is not top tier, but it is very very good.

It has a really bad matchup against Bombazar, since Angler Cluster dies when Bombazar enters the field. But against other decks it can always live up.
Here is the list i would recommend:

The deck is good, and very hard to deal with, since it quickly summons lots of creatures, while still keeping a hand. And dealing with multiple unblockable Lancers, after being set back by Coriles and stuff is really tough. Sure a light/water version of this deck, while still focusing on the liquid peoples is even better, as it has Tajimal instead of Angler, and can deal better with Bombazar. But if you wanna run mono in tcg, this is the tryhard way to go.
Bronze-Arm Sloth 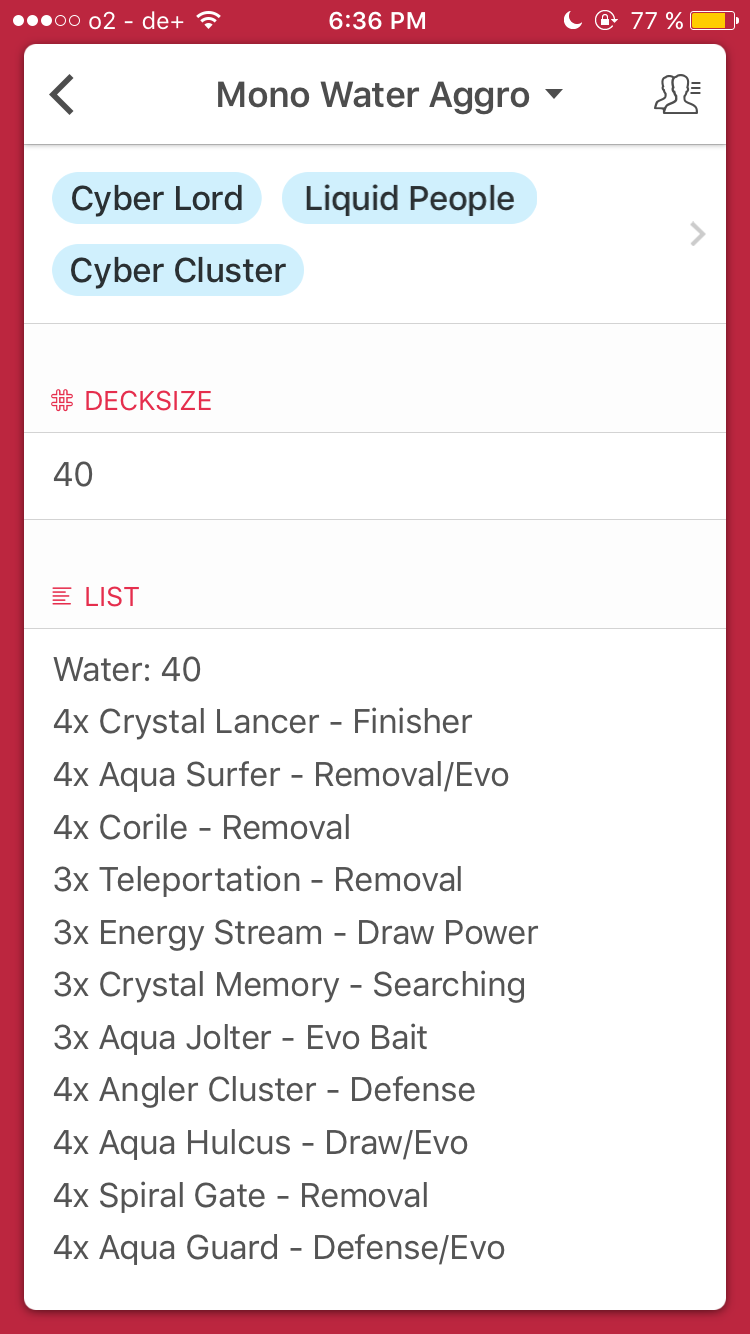 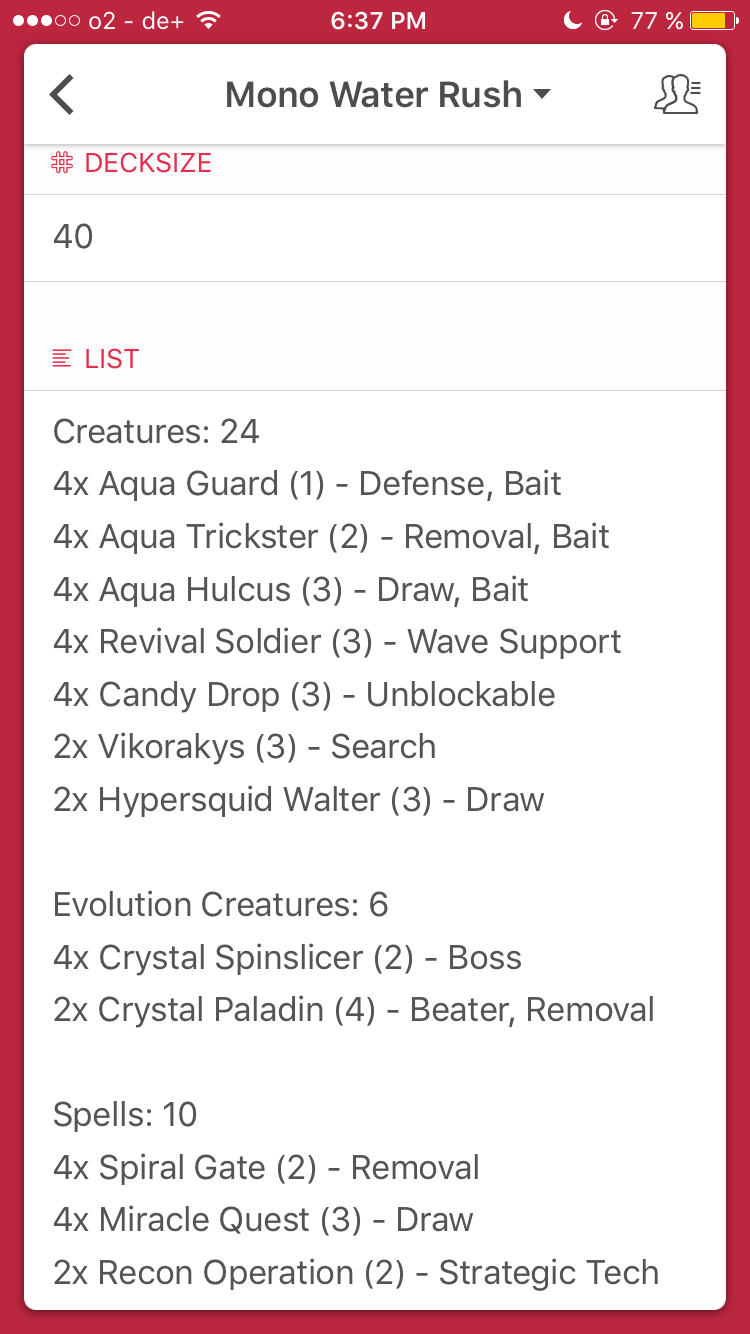 No? Lets hear how then. Maybe there are better versions for certain matchups, but this is the only all-rounder version that does well against all matchups (including rush). For 14 years i have tested almost all kinds of decks in this game, and this was the final version of mono water i could come up with, and it does really well. As well as i have ever been able to do with mono-civ.

But really, if you think there are better versions, i am very interested to see. Remember its TCG only.
LordSommerhill

The first one you posted is kind of the same thing as mine, just with a few variations. Crystal Memory i have tried before, but i just didnt find it too useful. You have enough draw power to get the stuff you need most of the time. So i switched it out for Hunter Cluster, so that i could have a shield trigger that is both offensively and defensively. Teleportation i didn't find neccesary either, as you already have 4 Surfers, 4 Coriles and Spiral Gate for removal.

The other deck i have never really seen. I will give it a go, but is it really necessary to run Wave Strikers in mono water? With only 8 in total, it seems a little hard to consistently have 3 of them on the field at the same time. I also feel like it takes away some of the focus on Lancer, as you lose their effect if you evolve them into him. And have you tried that last build against rush? It seems like it would be very weak against rush.
Bronze-Arm Sloth

Lol you don't get it..
Stsrting with the second build. It has beaten rush, since it rushs itself.
The waves are in as fillers and not for their effects.
Trickster over Vehicle, they have the same stats, but in case i can handle the wave striker effect matchup, it at least an effect. Also the 8 ones are enough and did their job, i just run them as fillers.
The deck does not run lancer btw. Spinslicer is able to attack in turn 2.
And to say it again, i won against the standard rushs as mono fire and fire nature, as well as fire/water.

The first build, i yes, as you say it more of a taste thing.
I would for example never run hunter cluster.
Also in my opinion it has too many blockers which aren't needed, thus i have a lot of bounce in my deck which worked out pretty great. The memories were added lately, because draw wasn't everything enough. Toolboxing gave me access to the whole deck. And if i don't need them played actively, they come from the shieds or land in mana.

So now tell me, why so many Emerals for just a few triggers in your deck?
LordSommerhill

I have 9 triggers in total. I like to have the option of playing an Emeral on turn 2 if i have any triggers in my hand, as it becomes very valuable later on. If i dont have any, i can put the Emeral in mana if i have better options. I just want a higher chance of pulling the Emeral+Surfer combo on turn 2. Emeral works a lot better in water/light and water/dark though, or Marino.
nitrox

Hmm, it's strange to see no Unicorn Fish in the mono water builds. It's amazing if you're going for rush and breaks the tempo of the opponent while increasing your own.

Mono-nature for me works best as a Zerg Rush, with lots of 1 and 2 drops - Sniper Mosquito, Hearty Cap'n, Poisonous Mushroom, Quixotic and so on. It's a very fast swarm.

Mono-fire is very hard to use mainly because there are no options for hand replenishment and with no Zyler's Lighter to use...not many advantages of using fire as a mono.

In mono-dark, Gigazald is very cool. Mongrel Man with sacrifical blockers and Slime veil provides some good techs. Ballom in mono-dark can be quite hard to pull off.

Lots of ways to build mono-light, but I'm not very familiar with those. I saw an Ailzonius build somwhere on TCO(I think it was a guy who built a lot of monos) which looked pretty cool. But Light has to rely on Mist Rias for the bulk for draw power and is very unstable against controls.

Mono Nature did not work well for me. Would love to see your build on that.

You can even do a great mono light rush btw, there are many options, i‘ve tried a few of them, they worked kind of stable :-)

On that mono water thing above, i guess its really all about personal preferences and the meta that is played in the respective areas. For me my build never disappointed, for LordSommerhill his might have done same for him. I think we are old enough to not flame on this...

Mono dark is full of options as well. I agree with you!
Also fire, yet mostly with rush and aggro type of decks
nitrox

Here's a quick build I did in the OCTGN Deck Editor from what I remenber(so many cards are just fill-ins): 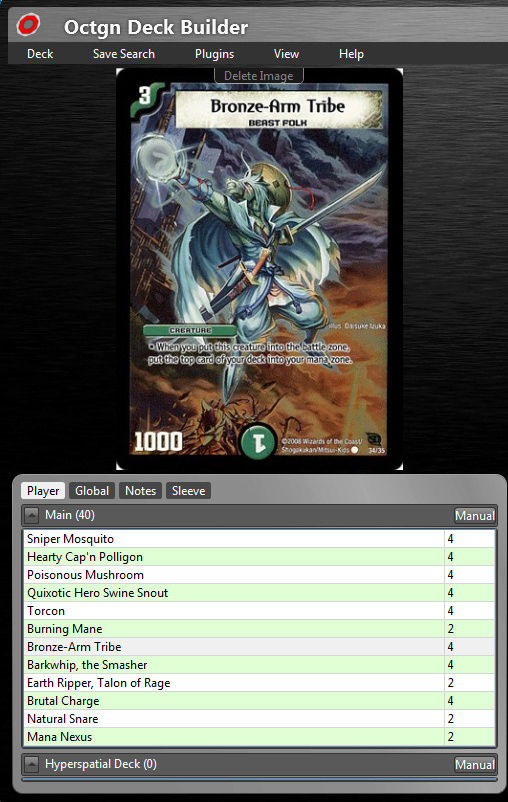 It's not very flexible and focuses everything on a fast swarming attack. Poisonous/Bronze build up the mana pool for Sniper to retrieve, you can also summon another 1 drop when you summon Bronze or Poisonous. There's no late mid-game except for more swarming with Earth Ripper. This works well only against certain decktypes, like slow controls without a lot of blockers or mass kill.
Bronze-Arm Sloth

Looks kind of cool!
Would play vine charger instead of burning manes and 2 more snares modt likely, but i really like this built.

I always tried to squeeze in Raging Dash Horn into my mono natures.
A friend plays it with 4 dim gates and terahorns, as well with ancient horn for swarming and „search as draw“
Worked amazing as aggro, though these kind of decks all have the cons

Thanks for sharing!
Halfar

I would say that mono water is the strongest. but mono dark or mono light are also playable.